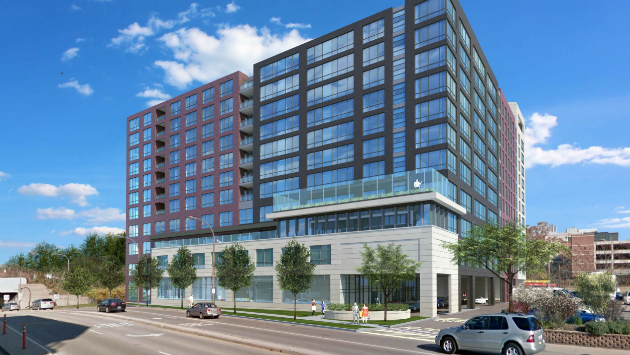 The Evanston Plan Commission voted 4-2 this evening to approve an 11-story senior living planned development at a former industrial site at 1815 Ridge Ave.

Commission Chair Jim Ford, one of the two members who voted against the project, said the planned building wouldn't provide a sufficiently gradual transition from the edge of downtown to lower density residential areas further to the west.

But Commissioner Terri Dubin, who voted for the project, said it wouldn't be possible to have a smooth transition — given the location "at the awful intersection of Ridge, Emerson and Green Bay." With the three streets and the railroad tracks, "I don't think there can be a transiton there," Dubin said. "It's a disjuncture."

And Commissioner Andrew Pigozzi said the site "has been sort of a dead zone on the east side of Ridge — a forgotten little triangular parcel."

"It's good that someone is looking at this site to develop, to bring vibrancy, to make it better," Pigozzi said. "I don't think it will change it for the worse."

"There's a waiting list for such housing, and Evanston is a good spot for such a development," he added.

Neighbors who live on the west side of Ridge have complained about the height of the project, saying it will interfere with views from their buildings. They also objected to the zoning change recommended by city staff in conjunction with the planned development proposal — taking the site from a C2 zone that would only permit commercial, mostly auto-oriented uses, to a D4 downtown transitional zone that permits the height the developer requested.

But in discussion at the meeting it was noted that the buildings on the west side of Ridge now used as residential condos had been originally built as office and retail spaces and still are zoned for office use.

The commission did attach one condition to its approval — that the developer identify the entity that will operate the independent and assisted living facility once its built before the City Council takes action on the proposal.

The project is tentatively scheduled for review by the City Council at its meeting on Monday, April 25.