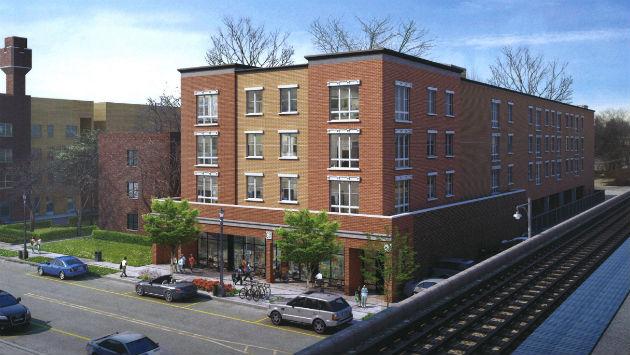 Tonight's meeting was the second session the commission has held on the project, and with Barbara Janes, the neighbor who had originally requested the extra session, out of town on family business, there was little fresh public comment about the proposal.

The project includes parking for 35 cars and a proposed 3,200 square foot ground-floor retail space intended for use for a restaurant. It also will include four subsidized housing units — the first under the city's so-called inclusionary housing ordinance that took effect this year.

The site now is occupied by a 1920s-vintage one story commercial building that formerly housed the Noyes Street Cafe.

Developer Gregory DeStefano plans to preserve the front and side walls of the existing building and construct the new building inside its foundation walls.

The building lot is divided between two zoning districts — B1 and R5 — and the proposal was reviewed as if it was all under B1 zoning.

The B1 zone permits commercial uses, which the R5 zone does not. But the B1 zone has lower limits on the number of dwelling units than R5 does.

The project now goes to the City Council where it will require a two-thirds majority vote for approval.