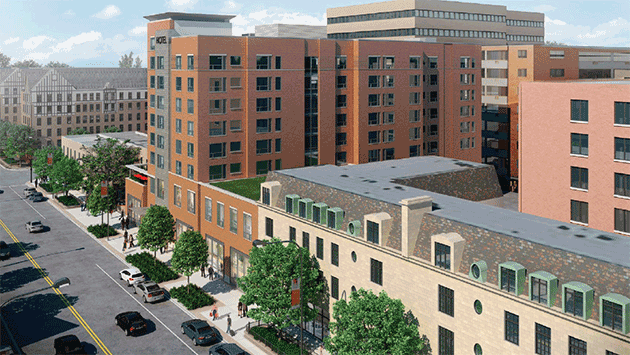 The commission rejected a recommendation from city staff that the developer be required to change plans for a limited service dining area in the hotel to a full service restaurant.

"I don't think this location needs a full-service restaurant," Commissioner Colby Lewis said, "we have 50 restaurants already within two blocks."

The commission also rejected demands from some neighbors that the hotel be required to set back parking spaces and the rear of the building itself five feet from the property lines.

"This is an urban setting," Chairman Scott Peters said, "I think the zero setback is contemplated by the zoning ordinance and downtown plan."

The alley behind the site, at 20 feet wide, "is larger than most of our alleys," he added.

The commission decided to leave unresolved what to do about a large elm tree along the site's south property line.

They suggested that, after further research, the City Council coud decide whether to:

The commission also voted to leave it up to the council to decide whether using permeable paving on the hotel parking lot — as proposed by one neighbor — would be a viable option that might reduce the need for an underground stormwater detention structure — one of the factors that put the future of the big elm tree at risk.

Even neighbors who complained about alley congestion and other issues at the meeting said they generally favored the the hotel proposal — especially compared to a previoius plan for a high-rise condo development at the site.

And Bill Schermerhorn of Schermerhorn & Co., which manages the Chaumont building next door, said, "We're definitely for this project."

Schermerhorn said that in the site's former use as a real estate and insurance office "they parked right up to the alley."

"I think there's a ton of upside to this project," Shermerhorn added, "It's going to be great for the tax base and we don't have an extended stay hotel now."

The project will next be reviewed by the City Council's Planning and Development Committee, possibly as soon as its March 24 meeting.