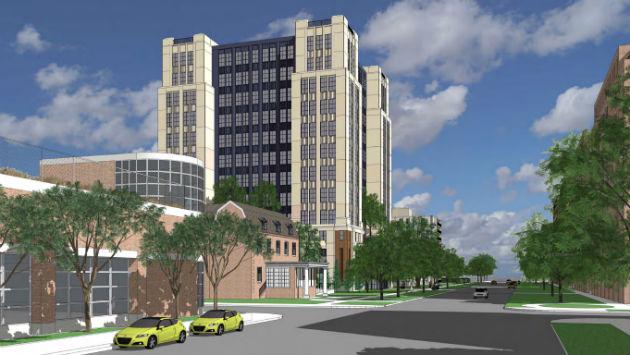 Evanston’s Plan Commission voted 4-1 this evening to recommend denial of plans for a 13-story office building that would add an estimated 500 jobs to the downtown area.

The building is proposed for construction on what’s now a city-owned surface parking lot between the Woman’s Club of Evanston and the Frances Willard house museum in the 1700 block of Chicago Avenue.

The City Council has entered into a contract with the would-be developers of the property to sell it to them for $4 million, conditioned on the project winning approval by the Council of the planned development proposal for the building.

Commissioner Andrew Pigozzi, an architect, criticized the design of the building saying he was “not convinced that it fits in or is appropriate.”

“The column spacing is different from one side to the other,” Pigozzi said, and the form “should be consistent.”

“I’m not convinced that this design is well thought through in terms of creating an efficient office building,” he added.

Commissioner Carol Goddard said, “We know the city wants an office building on this site. But the project is asking for a lot of variations, for which the city generally gets something back — a little park area, a patio, anything that’s for the public’s benefit.”

“What’s being offered here is not meaty enough to offset the variations you’re asking for,” she told the developers.

During public comment at the meeting, Joan Safford, of 1618 Wesley Ave., said that she and other opponents of the project had gathered signatures on a petition opposing the rezoning from R6 to D3 required for the project from more than 30 percent of the property owners within 500 feet of the site.

Under the city’s zoning code, that would trigger a requirement that the zoning change would require approval of three-fourths of the City Council members — or seven votes.

The original decision to authorize the land sale, in September 2017, was approved by the aldermen on a 6-2 vote, with Alderman Tom Suffredin, 6th Ward, absent from the meeting.