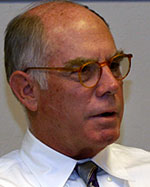 Stuart Opdycke, the vice-chairman of Evanston’s Plan Commission, has become the first candidate to take out nominating petitions for next spring’s mayoral election.

Opdycke, who’s 65 and a life-long resident of Evanston, says that after a 35-year career as a lawyer, he’s ready to have job where he could walk to work.

"I’ve had a little taste of municipal governance being on the Plan Commission, Opdycke says, "and I rather enjoy it."

Opdycke, who lives at 1327 Hinman Ave., says he believes dealing with the municipal budget crisis will be the biggest issue facing the city’s next mayor and that he hopes to develop strategies for dealing with that in conversations with past and present city leaders over the next few weeks.

In terms of city infrastructure, "fundamentally I think the town is in pretty good shape," Opdycke said.

"Given the economy, I think the window for new development is pretty much closed, certainly for the next year," he said. "I know people still have signs on their front yards about the tower, but I think it’s safe to take those in now."

He said the Plan Commission is "just one meeting away" from wrapping up work on a new downtown plan.

"If the City Council follows the commission’s recommendations, no building will be able to exceed 15 stories as a base height, and even with allowances it would max out at something like 27 stories," he said. 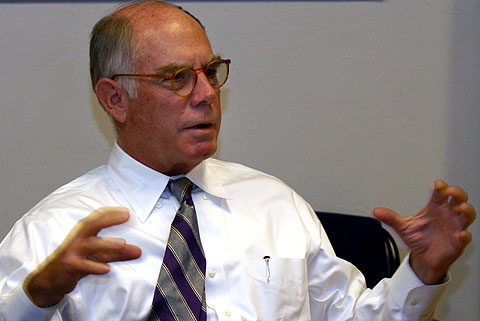 Opdycke said that as mayor he’d like to work to improve relations with Northwestern University.

"They’re a great asset to the community, and I think we ought to work hard to improve that relationship" although he also suggests that the question of getting non-profits to contribute more to the cost of city services ought to be looked at. "It’s a real legitimate question," he said.

"I love this town," Opdycke said, noting that he attended Washington Elementary School, Nichols Middle School and Evanston Township High School and has raised three sons here. "I’ve been on the school board, I know the streets and neighborhoods I think as well as anyone. I know the character and culture of the community."

He said incumbent Mayor Lorraine Morton, who’s indicated she doesn’t plan to seek re-election, "has done a wonderful job and served with so much grace. We’ve been very lucky to have had her at the helm."

City Clerk Rodney Greene said this afternoon that no other candidates have yet taken out petitions to run for mayor.

Opdycke and other sources have said they understand Alderman Elizabeth Tisdahl, 7th Ward, is planning to run

Tisdahl and Lindwall could not be reached for comment this afternoon.

Greene says that if more than two candidates file petitions for mayor by the Dec. 15 deadline, a primary election for the mayor’s job will be held on Feb. 24. The general election will be held April 7.

He said petition forms for mayoral candidates and candidates for alderman, city clerk, township supervisor and township assessor have been available at the clerk’s office since Monday.