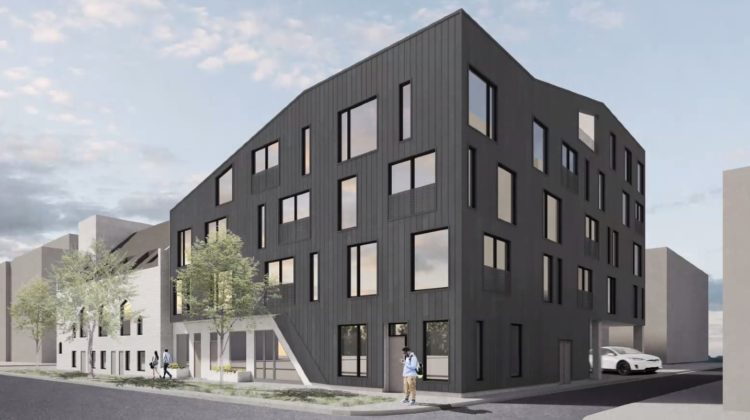 A rendering of the 1101 Church project looking southwest from the Oak Avenue alley at the northeast corner of the site.

Evanston’s Design and Project Review Committee has recommended approval of plans to build 30 apartments at the site of the former Sojourner Covenant Church downtown.

The plans from Campbell Coyle Real Estate call for renovating the church to hold seven townhouse-style units and constructing a new five-story, 23-unit apartment building on the site of the former parsonage and the parking lot behind the church at 1101 Church St.

Developer Chris Dillion said the apartment units would be designed to provide work-from-home functionality and units in the former church would have private entries and some outdoor space.

City Engineer Lara Biggs urged Dillion to plan to rebuild the alley behind the property that “is in really poor condition” now, suggesting “construction vehicles will probably tear it up quite a bit more.”

Community Development Director Johanna Nyden suggested that the developer contribute funds to the city to plant trees in the parkway in blocks around the site. “If it makes sense to amortize the cost of that contribution over a period of years, we can work with you on that,” Nyden added.

The project plans call for providing just eight parking spots on site and Dillion said he’s working to rent additional spaces from the city or private landlords in the area to meet the total of 22 spaces required by the zoning code.

The development as proposed has a maximum height of 49 feet, considerably less than the 85 feet allowed in its R6 zone. But the developer is requesting substantial variations for reduced setbacks.

Dillion said that given the unusual configuration of the property, it would be very difficult to make the project work without those setback variations.

The plans call for three on-site affordable units, as required by the city’s inclusionary housing ordinance. The project will include a mix of one, two and three bedroom units.

There was no public comment on the project at the Wednesday afternoon DAPR meeting, and the committee voted unanimously to recommend approval for it. The plans next move to the Zoning Board of Appeals for its review.