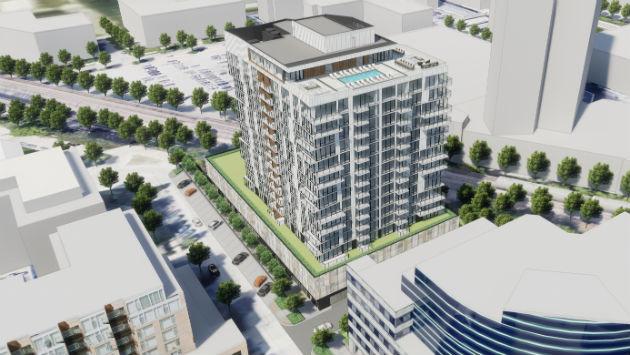 The commissioners voted 6-1 to approve the plan proposed by developer Trammell Crow with two conditions — that the developer work with commission members to consider possible modifications to the facade and that construction of the project be coordinated with the already approved 1815 Ridge development a block to the north.

It appeared from the commission’s debate that the commissioner who voted against the project with the added conditions would have voted to approve it unconditionally.

Several residents of the Sienna condominium development across the street complained that the new project would create parking difficulties for caregivers of the roughly 20 Sienna residents who are disabled.

One said that caregivers, who typically work 12 hour shifts, now have to feed parking meters every two hours to be able to park close to the building.

It was unclear from the discussion why that was considered more convenient than making a five-minute walk to the city’s Maple Avenue parking garage, where parking for up to 12 hours would cost $8, compared to $12 for most on-street meters.

Neighbors also complained at previous meetings that street conditions were unsafe near the site with heavy traffic and speeding cars.

However a police traffic study conducted since last month’s Plan Commission initial hearing on the project indicates that the average speed of drivers passing the site is just over 18 miles per hour.

An earlier traffic study by the developer’s consultant showed that 222 cars now go around  corner of Oak and Clark Street just north of the site during the morning rush hour peak from 8 and 9 a.m — or roughly one car every 15 seconds.

The traffic study forecasts the new development would add 16 cars — or roughly one every four minutes — to that flow. 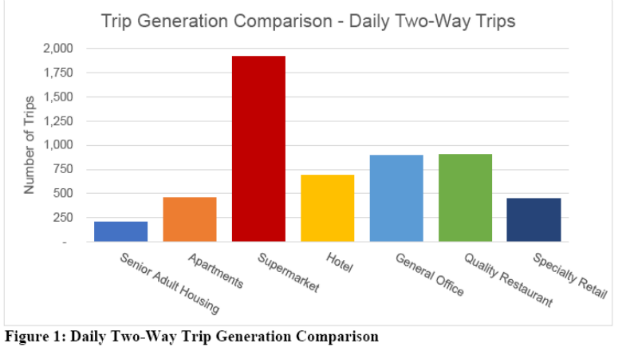 The developer also presented a chart suggesting that any other likely development of the site would generate considerably more traffic than the senior adult housing complex being proposed.

The developer also showed plans for reconfiguring an existing mid-block crosswalk at the site with bump-outs to reduce the exposure of pedestrians to vehicle traffic and to reconfigure the roadway at the Oak to Clark curve to improve safety there.

Plan Commission Chair Colby Lewis said that in addition to meeting the city’s zoning requirements, the project conforms to the city’s 2009 Downtown Plan, which called for a 15- to 18-story building on the site.

Commissioner Peter Isaac said he believed the development would fit in well with the neighborhood and meets the city’s requirements and guidelines.

Lewis said it’s not a new development’s burden to correct all the problems in the area, but it should not add to them, and be believed this project met that standard.

Review of the project now moves to the City Council, where the development could come before the Council’s Planning and Development Committee as ealy as the April 23 meeting.

Alderman Peter Braithwaite, 2nd Ward, said he hoped to schedule a community meeting before then to address concerns about parking and traffic raised during the meeting by the Rev. Taurus Scurlock, pastor of Mt. Zion Church at 1113 Clark St.