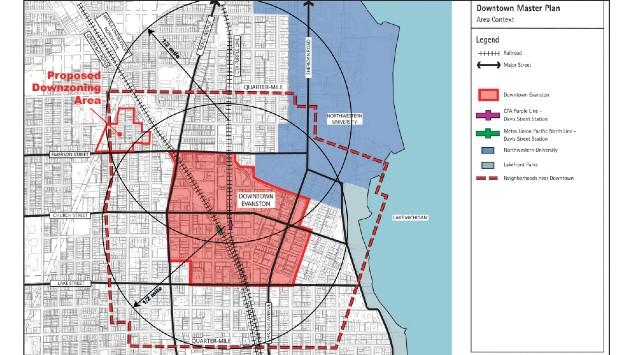 Evanston’s Plan Commission is scheduled to vote Wednesday on a proposal to downzone land north of Emerson Street just west of downtown — which brings goals of encouraging transit-oriented development and new affordable housing into conflict with preserving existing neighborhood character.

The area — roughly bounded by Green Bay Road, Emerson and the former Mayfair railroad right of way — was designated R5 by the city’s 1993 zoning ordinance — a classification that permits buildings five stories high, with the potential of an extra story for planned developments.

A 2005 neighborhood plan suggested reducing the height limit to three-and-a-half stories, but the recommendation had never been acted on.

That changed when a developer in late 2018 proposed building 44 condominiums in two five-story buildings on seven lots at the corner of Emerson Street and Jackson Avenue — the first sizable new construction in the area since the 1970s.

Neighbors attacked the developer’s plans and scared him off. And Alderman Robin Rue Simmons, whose 5th Ward includes the area, asked city staff to move forward with the downzoning idea.

But a consultant hired by the owner of properties the developer had planned to buy says downzoning would be a mistake.

George Kisiel of Okrent Kisiel Associates says the zoning change would reduce the developable floor area of his client’s property by about a third.

Kisiel says that means redevelopment in the area would lead, under the city’s inclusionary housing ordinance, to the creation of fewer affordable housing units.

It would also, he says, dramatically reduce the potential property tax revenue the city could realize from redevelopment in the area — potentially by nearly $1.5 million a year.

He also argues that the area — no more than a 15 minute walk to three train stations — is a prime one for higher-density transit-oriented development — something the city has tried to encourage in recent years.

But Christopher Gotschall and Timothy Samuel, who own a home in the neighborhood at 1910 Wesley Ave., say in a letter to the Plan Commission, that the proposed downzoning is the least the city could to protect the area from “density that is inconsistent with the character of our evolving neighborhood and that could negatively impact the quality of life.”

City staff notes that in addition to accepting or rejecting the proposed zoning change, the commission could recommend leaving the zoning unchanged in part of the area, but proposing a change in the rest.

Whatever the Plan Commission recommends, adopting any change will ultimately be up to the City Council.

The Plan Commission meeting is scheduled for 7 p.m. Wednesday in Room G300 at the Civic Center.