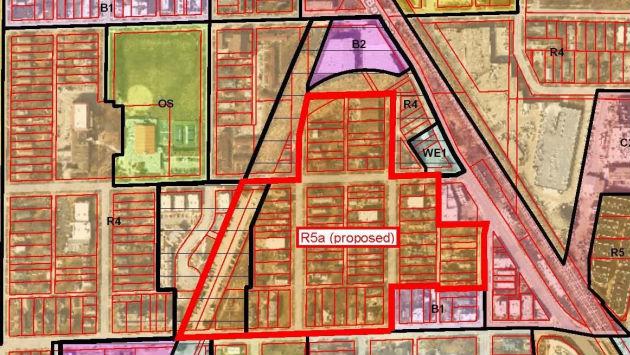 Evanston’s Plan Commission tonight is scheduled to discuss a proposal to downzone most of a trianglar section of the near west side, bounded roughly by Emerson Street, the former Mayfair railroad right of way and Green Bay Road.

The area is now zoned R5, which permits a maximum building height of 62 feet for planned developments and 50 feet for smaller projects.

The proposed new zoning category, R5a, would reduce the maximum building neight to 54 feet for planned developments and 42 feet for smaller projects.

The proposed downzoning is an outgrowth of a request from Alderman Robin Rue Simmons, 5th Ward, following the submission of plans last fall for construction of 44-condominium units in two five-story buildngs on the northeast corner of Emerson Street and Jackson Avenue.

A rendering of the since-withdrawn proposal for condos on Emerson Street at Jackson Avenue.

Objections from neighbors led to the withdrawal of those plans. The neighbors pressed for the area to be rezoned to R3, which would limit building heights to 47 feet for planned developments and 35 feet for smaller projects.

The area currently has a mix of single family homes and small apartment buildings, most of which were constructed a century or more ago.

If portions of the area were to be redeveloped, recent projects in other areas zoned R3 indicate new single-family or duplex dwellings would only be affordable to upper income residents.  Small-scale projects would be exempt from the city’s affordable housing requirements.

By contrast, larger, higher-density developments permitted under R5 zoning would most likely result in construction of multi-family housing at a lower price point and would have to comply with the city’s affordable housing requirements.

The Plan Commission could recommend changing the zoning for all or part of the area proposed by city staff, or leaving the zoning unchanged.

The Commission’s meeting is schedule for 7 p.m. in the City Council Chambers at the Civic Center.

Update 7:40 p.m.: At the request of Thomas Ramsdell, an attorney for Victoria Kathrein, the owner of properties included in last year’s development proposal, the Plan Commission this evening voted to continue discussion of the proposed text and map amendment changes until the Commission’s Dec. 11 meeting.