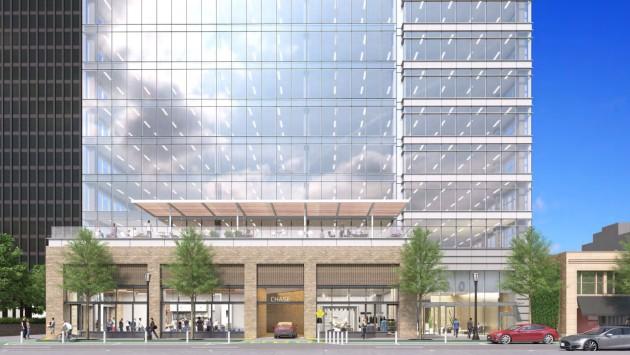 Evanston’s Plan Commission voted near midnight Wednesday to recommend City Council approval of a 19-story office tower in the 600 block of Davis St.

The tower, expected to house about 950 office workers, would replace a vacant lot and the existing Chase Bank drive-thru on the site.

Although some residents speaking at the meeting had argued the tower was too bulky for the site, Commisioner George Halik said he believed it was far from bulky.

He said office building floor plates are typically much larger than what Vermilion Development is proposing for the Evanston site and “the way the architects have broken down the expression of the facade to accent the vertical makes it feel less bulky.”

Commissioner Jane Sloss said the design of the base of the building “is really successful” and that the plaza at the entry “gives some relief there,” adding that, “I love the datum line” that ties the planned tower to the adjacent University Building.

The plans submitted call for 40 parking spaces on the second floor of the building with the developer pledging to lease an additional 150 spaces at the city’s Church Street garage a block north of the site.

Commission Chair Peter Isaac raised questions about whether the proposed parking to be provided — which is similar in quantity to that offered at new buildings in Chicago’s fast-growing West Loop neighborhood — would be sufficient in Evanston.

Isaac said the West Loop is easily accessible by mass transit from all directions, while Evanston only has strong mass transit access from the north and south.

But the developer’s traffic consultant, Luay Aboona, said the West Loop is actually not all that convenient for public transit access and that major employers there,like Google and McDonalds, end up having to use shuttle buses to take employees to commuter rail stations.

One resident, Joan Safford of 1608 Wesley Ave., raised concerns about the amount of handicap parking in the building, given that most of the parking to be provided would be located off site.

The developers responded that the two spaces provided met state requirements — which are based on a percentage of the on-site parking stalls — but they said that if the city wished they could double that to four spaces while only reducing the total parking capacity of the building’s second floor to 39 from the planned 40 spaces.

He called the parking solution “very clever,” and, responding to concerns from some residents about potential increased pedestrian traffic, said “that’s precisely what we’re hoping to achieve” — more people eating and shopping downtown.

The commission voted 5-0 in favor of the project after amending the proposal to recommend providing the four on-site handicap parking spaces and to modify language regarding a possible future termination of the drive thru.

Chase, which owns the existing drive thru site, had said that language was unacceptable and would cause them to refuse to sell the drive-thru property — effectively killing the project.