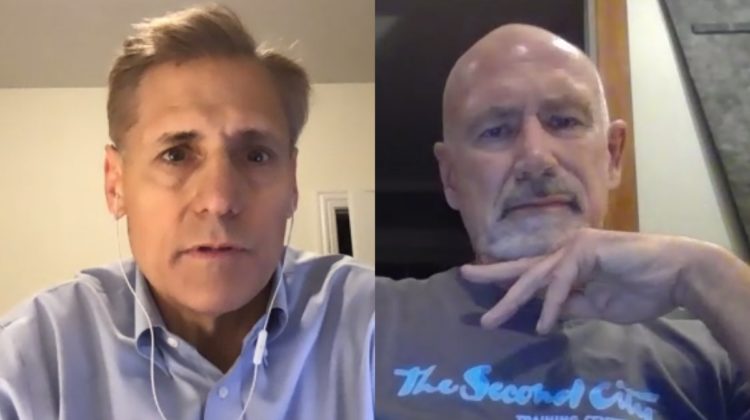 Paul Hewko and George Halik were on opposite sides of the Plan Commisison vote.

Evanston’s Plan Commission ended up split 3-3 Wednesday night on plans for a 16-story mixed-income building at 1900 Sherman Ave. proposed by the Housing Authority of Cook County.

The tie vote means the plans move forward to the City Council without a recommendation from the commission.

Commissioner George Halik, who voted against the project, voiced concerns about its height. He asked Rich Monocchio, HACC’s executive director, if there was any way to complete the project with a shorter building.

Monocchio said, “We did consider some different models early on. But it became clear that for the project to work financially and provide affordability at scale” the proposed height was necessary.

Commisisoner Paul Hewko, who voted for the project, said he also was concerned about the height, but that the city needs the affordable housing it would provide. “If the height drops to even 12 stories, the economics don’t work,” he added.

“It’s not an easy call, but I’m very much in favor of this on balance,” Hewko said, adding that he saluted the housing authority for its creativity in coming up with the proposal.

In discussing the idea of a shorter development, Isaac noted that making a building shorter doesn’t necessarily make it more pleasing. He cited the example of The Link Evanston, at 811 Emerson St. just west of the HACC site.

Originally proposed as a 14-story structure, the project was rejected by the city even at a reduced 12-story height. Eventually, revised plans for a nine-story version were approved — producing what Isaac argued was “the worst design presented to us.”

“It did lower the height,” Isaac said, “But it definitely wasn’t as attractive as the buildings proposed previously on that site.”

During public comment at the hearing residents were also sharply divided on the proposal with nine people speaking in favor of it while 10 voiced opposition.

Even most opponents of the project claimed to favor its affordable housing component, but objected to the building’s height.