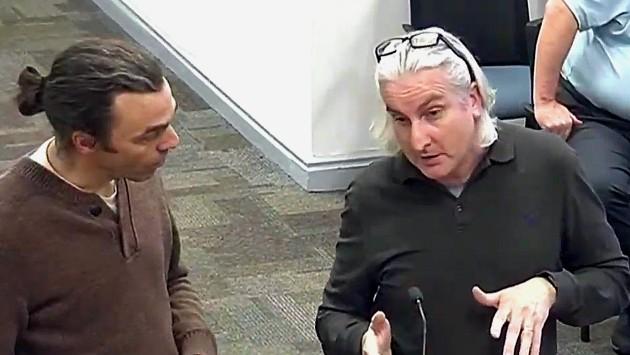 Evanston’s Plan Commission voted 4-2 Wednesday evening to maintain a zoning overlay restriction that effectively bars development of long-vacant parcels in the 5th Ward for housing by designating them for use as new streets.

Developer John Cleary of Evanston is requesting the zoning relief as a first step toward seeking approval for a planned development that would include 16 townhomes on the crescent-shaped parcel of land that once formed part of the wye connecting the former Mayfair rail line to the mainline commuter rail tracks just east of Green Bay Road.

The land has a street address of 2044 Wesley Ave. and runs from Jackson Avenue to Green Bay south of Simpson Street.

An aerial view of the vacant former railroad right of way proposed for development. (Google Maps)

The City Council adopted the zoning overlay regulations in 2009 based on a neighborhood plan adopted in 2007 that envisioned massive redevelopment of the area that would require the assembly of many land parcels into large development sites. The plan prioritized completing the street grid broken by the tracks as one of its key goals.

An illustration from the 2007 plan showing extensive redevelopment and the new street grid.

The real estate market collapse that was already well underway by the time the overlay rules went into effect has generally made such large-scale developments in Evanston financially unfeasible ever since.

In response to a question during the meeting from Markus Lechleitner of 1919 Wesley Ave., Cleary said he anticipated that the townhomes, with about 2,000 square feet of living space and attached two-car garages, would sell for between $500,000 and $550,000.

“Someone should be able to buy one with a mortgage payment of about $2,000 a month,” Cleary said.

A preliminary site plan for the development.

Instead of a new public street, Cleary’s proposal calls for a private drive to provide access to Jackson and Wesley avenues.

Jeff Masters of 1918 Wesley Ave. told commissioners he worried that if the overlay was removed a new developer might come in and propose something entirely different for the site.

Without the overlay, the property would revert to its underlying R4 zoning, which imposes a height limit of 35 feet but does allow apartment buildings as well as townhomes and single family dwelling.

Carolyn Dellutri of 1924 Wesley Ave., said she believes the city should do a new planning study of the whole area.

Christopher Gotschall of 1910 Wesley Ave., said agreed with the idea of doing a new plan, although he added, “I’m not saying this plan for townhomes isn’t a great plan.”

Plan Commissioner Carol Goddard suggested that — given the limited amount of new development in the area covered by the overlay district — it doesn’t appear to have accomplished its goal and shouldn’t be maintained.

But Commission Chair Peter Isaac said it seemed haphazard to remove just a few parcels from the district. “By agreeing to remove this parcel we are affecting the viability of other areas and what the master plan calls for for those.

The rezoning proposal now goes to the City Council for a final decision. If the Council rejects the rezoning, Cleary could proceed to submit a planned development proposal for the project that also called for the rezoning.

But he told the commission he had hoped to avoid what he estimated would be a $100,000 expense of preparing detailed plans for the project without first getting an indication of whether the rezoning could be approved.