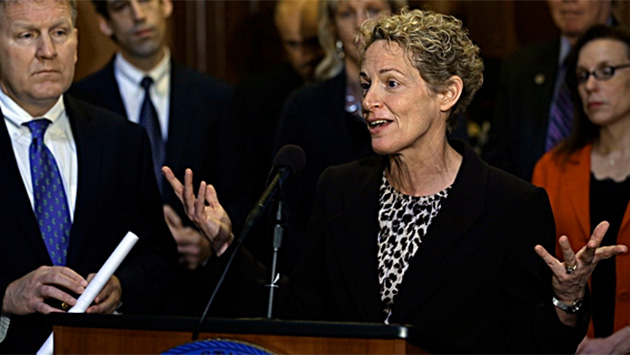 SPRINGFIELD  —  Illinois’ latest plan to shed its worst-in-the-nation pension ranking would get “the state out of the pension business” by shifting future costs for public school teachers and university employees on to local taxpayers.

A group of Republicans and Democrats from both the Illinois House and Senate today unveiled a plan they say could save Illinois $2 billion this spring.

“The total savings, between now and 2045, would be almost $160 billion, the decrease in the unfunded liability would be $28 billion immediately,” said state Sen. Dan Biss, D-Evanston, who added the next payment for all five of Illinois’ pension plans would drop by $2 billion this spring.

Illinois is set to pay nearly $8 billion for pensions in the next budget. The total unfunded liability is nearly $130 billion, according to some estimates.

The newest proposal is a tweak of a number of old pension reforms, again focusing on cost-of-living adjustments and a cap on pension income, while requiring public employees to pay more for their own retirement.

But the biggest savings to Illinois would come from having local schools and the state’s public universities pick-up the entire cost for their new workers’ pensions. Illinois would continue to pay the bulk of the multi-billion tab for teachers and university workers currently on the job.

“If you are a new employee … you would contribute 4 percent of your salary toward a (defined benefit) plan,” said House Republican Leader Tom Cross. “And at the same time you would accumulate a (defined contribution) plan. You would put in 5 percent, and your employer could put anywhere from 3 to 10 percent. That would be negotiated by the school district or the university”

New employees, according to the pla,n would be anyone hired after Jan. 1, 2014.

By shifting the cost from the state to local schools and universities, Illinois would get out from under the expected future costs of paying for defined-benefit retirement plans for thousands of future teachers and university employees.

Republicans like Cross and Rep. Darlene Senger, from the affluent suburb of Naperville, have opposed a cost shift in the past. But Senger said this plan protects teachers who are now in the classroom.

“Not everybody is going to be happy. Almost everybody will have some piece of this that they don’t like,” Senger said. “But we will guarantee that you will have a pension in 30 years, and we will be out of this problem once and for all.”.

The cost shift may produce the biggest savings, but it is not the biggest legal hurdle for pension reform.

The new proposal would raise the retirement age to 67 and apply a cost-of-living adjustment only to the first $25,000 of a public workers’ pension.

That is sure to trigger a court fight over Illinois’ constitutional guarantee that pension benefits cannot be diminished.

Within hours of the new proposal being made public, the We Are One Illinois coalition, a group of the state’s largest public employee unions included the American Federation of State, County and Municipal Employees, the Illinois Education Association, the Illinois Federation of Teachers and the state’s AFL-CIO chapter was dismissing the legislation.

“Like the previous approach, HB 3411 continues to focus on unfair, unconstitutional benefit cuts that erode the value of retirees’ pensions,” the coalition said in a news release.

The unions have made no secret that they want lawmakers to raise taxes to pay for the pension system.

State Rep. Elaine Nekritz, D-Northbrook, however, is not worried about having to argue for the reforms.

The pension plan from Cross, Nekrtiz and Biss comes one day before the Illinois House is scheduled to vote on a number of pension reform proposals.

The action Thursday is expected to test various pension plans, but is not expected to produce a final piece of legislation.