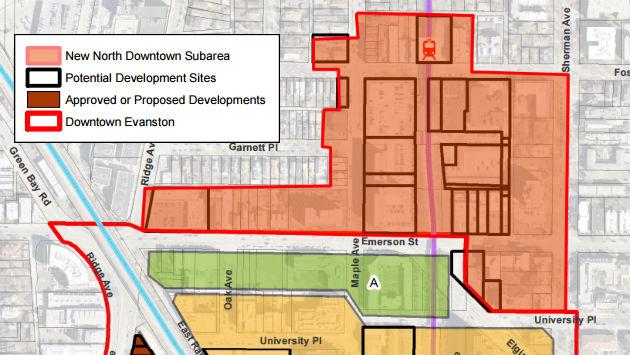 A proposal up for discussion by aldermen Monday night would expand the size of Evanston's downtown area by about 15 percent, adding roughly 25 acres mostly north of Emerson Street.

The expansion would be focused on the area around and just south of the Foster Street CTA station.

A study of possible rezoning of the area was suggested by Aldeman Judy Fiske, 1st Ward, on Feb. 22, as aldermen voted to reject plans for a 12-story rental apartment complex targeted to college students for a site on Emerson that would be included in the proposed north downtown study.

Regional planners have forecast that Evanston will add about 12,000 residents between 2010 and 2040, raising questions about how a landlocked community will handle such growth.

Its location along the Purple Line, Muenzer suggests, makes at a natural spot to consider rezoning to permit higher-density, transit-oriented development although not as dense as what's found in the core of downtown.

If aldermen give the go-ahead Monday, Muenzer proposes holding an information-gathering meeting followed by a planning charrette this spring as well as market research and an analysis of possible public funding options that could support redevelopment efforts.

He suggests staff would return to City Council with an update report late in July.