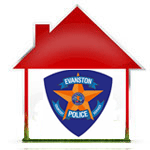 Evanston aldermen tonight are to receive a preliminary report on ways to encourage more city police officers and firefighters to live in Evanston.

The idea arose from a council discussion last month of a complaint alleging racial profiling by police. Its backers argue that more police officers who work in Evanston lived here, they might be better able to distinguish criminals from law-abiding residents on sight.

Only a minority of the city's police officers and firefighters now live in Evanston.

City staff tonight will present a preliminary report on the concept. The report says that in other communities such programs for home buyers typically provide down-payment assistance, reduced mortgage interest rates or reduced settlement and administrative costs,

The down payment assistance typically ranges from $1,000 up to $5,000, and funds typically are allocated annually and awarded on a first-come-first-served basis or through a lottery.

Although the staff report doesn't mention it, such "Live Near Your Work" programs in the Washington, D.C., metro area typically are also open to employees of other major employers — including universities and medical centers — with those employers contributing to the financial incentives.

And a similar program encourages workers at the University of Minnesota to live in neighborhoods near the campus.

The city staff report doesn't provide any information on whether the programs actually result in more workers living in the targeted areas than would have happened without the incentives.

It will be up to aldermen to decide whether to move forward to develop a specific "Live Near Your Work" program for Evanston.