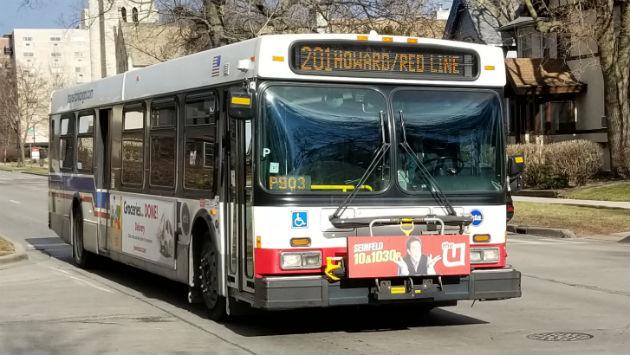 Under the proposal being considered by the CTA and Pace, CTA Route 205 that now serves the high school with 27 daily runs in each direction from the Skokie Courthouse to the Howard Red Line station would be eliminated.

It would be replaced in part by realigned service from the west from Pace Route 208 as far east as the Davis Street Purple Line station, with about 30 daily runs in each direction.

But Route 205’s existing service from the Davis to Howard stations would only be replaced by one morning and one afternoon extended run of Pace Route 213 — which would travel from Howard Street to ETHS.

At other times, riders from southeast Evanston would have to either take the CTA Purple Line or the CTA Route 201 bus that runs on Ridge Avenue to Davis Street and then transfer to the Route 208 bus for the trip west to ETHS.

The transfer likely would add 10 to 15 minutes to a rider’s travel time according to a Pace spokesperson, Maggie Daly Skogsbakken.

Skogsbakken told Evanston Now this afternoon that, in the wake of a large turnout at a Tuesday public meeting to discuss the changes, Pace and the CTA are now reconsidering the route shifts and that both agencies will have representatives at Monday’s City Council meeting.

“We’re not making any promises,” Skogsbakken said, “but we’re reevaluating our resources.”

She said Pace’s goal is to make any changes cost neutral while trying to benefit as many people as possible.

She said that under state law Pace is barred from competing with private bus companies to provide school bus service, and any of its routes have to be designed to accommodate the general public.

But she said agency officials are working to see if there’s anything else that can be done with available resources to improve service to the high school.