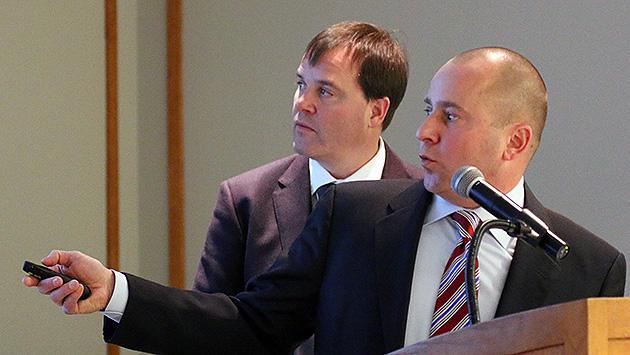 Developers of an extended stay hotel planned for downtown Evanston told neighbors Wednesday night that they've reached a franchise agreement with the Hyatt House chain for the project.

Developer Tom Blunk said the planned eight-story building at 1515 Chicago Ave. had been designed to preserve views for neighbors across the alley to the east by orienting the hotel tower east-west on the lot.

About three dozen people turned out for the meeting at the downtown public library. 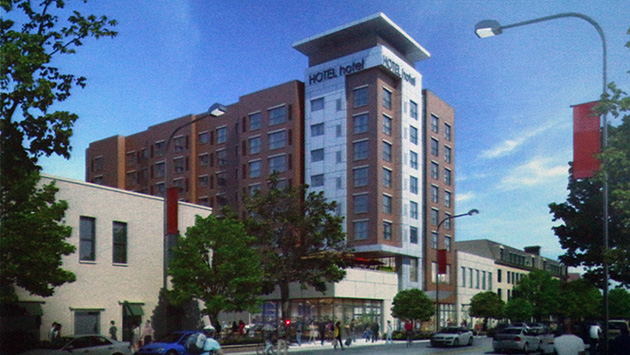 A rendering of the hotel looking southeast on Chicago Avenue from Davis Street.

Some neighbors complained about the metal panel "top hat" feature crowning the building, which Blunk said Hyatt considers an important part of its identity.

While no one complained about the plan to clad most of the building in brick, some objected to the use of metal as a surface for vertical bands on the structure leading to the tower.

Blunt and architect Devon Patterson said they could consider coming up with an alternative for that. 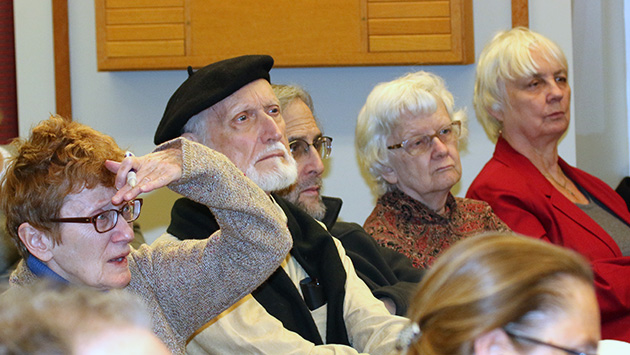 Residents listening to the presentation.

The developers also assured residents that there would be very little noise from heating and cooling units.

And they sought to lay to rest fears that Northwestern University students might end up being tenants in the building by saying that room rates would start at over $100 a night.

"You can't prohibit students from coming in, Blunk said, "but that's not even on our radar screen."

"And there's no reason you couldn't have the same issue at the Homestead, the Hilton Orrington or the Hilton Garden" — other hotels downtown.

The typical extended stay guest, Blunk said, is a professional on assignment for a week or so — perhaps at Rotary International or one of Evanston's hospitals.

In most respects — including height and floor area ratio — the hotel design meets city zoning requirements. 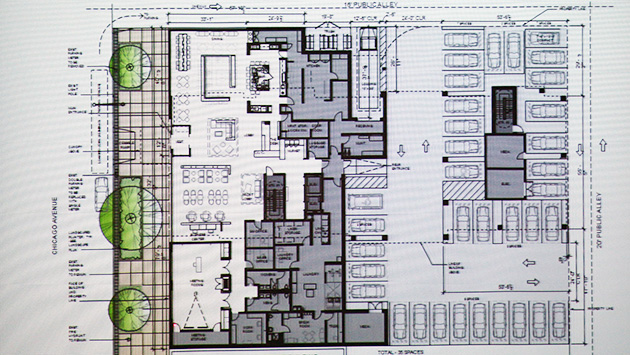 The plan for the hotel's ground level.

But the developers are asking for a variance to place parking up to the alley line — rather than being set back five feet as city regulations require.

Neighbors said that would make it hard for residents to navigate the alleys — especially in the winter with snow on the ground.

But Blunk said the parking arrangement was dictated by the tight confines of the lot.

An extended stay hotel has to have over 100 rooms to be economically viable, Blunk said, and to fit that within the city's height limits left not much room for parking.

In response to a question he said that underground parking would cost at least $40,000 a space, which wouldn't be economically justified.

The developers plan to lease spaces in the city's Church Street garage or the privately-owned garage in the 500 Davis building, to supplement the spaces on site.

The proposal next goes to the city's Site Plan and Appearance Review Committee at 2:30 p.m. next Wednesday.

It is then scheduled to be reviewed by the Plan Commission on March 12 and by the City Council sometime in April.

Blunk said it the project wins city approval, construction would likely start this summer, with completion by September of 2015.

The developers project the project will generate $600,000 to $850,000 in new real estate and hotel taxes for the Evanston and say they aren't asking for any financial incentives from the city.