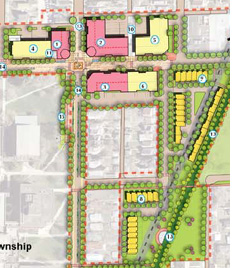 Some Plan Commission members say there's not enough housing diversity in the rezoning plan city consultants have developed for the industrial corridor along the old Mayfair railroad right of way.

Chairman Albert Hunter, at Wednesday's Plan Commission meeting, said, "The nature of the housing that's built largely defines the social class of the residents. This is relatively homogeneous, a restrictive range within the socioeconomic continuum. You're cutting off a mixture that might include more upper middle class residents."

Plan Commissioner Douglas Doetsch agreed saying, "Ninety percent seems to be townhouses. It doesn't appear like there's all that much diversity here."

City Planning Director Dennis Marino responded that the city would try to use a variety of programs to bring down the cost so some units would be more affordable to lower income residents.

"But that's only on the low end," Mr. Hunter said, "I'd like to see more class integration across the spectrum in Evanston."

"Unless people are going to wait a long time for development," she said, something less expensive is needed. "People in the area want something happening sooner that's more viable," she added.

But Plan Commissioner Larry Widmayer, who lives just east of the area that's the subject of the plan, said, "You'll only be three blocks away from downtown in some of these houses."

Mr. Widmayer added that larger, more plush town homes could also be part of the solution. "We have some high-end townhouses on Central Street," he said.

Ms. Kretchmer said depending on the size and density of the units, she anticipates that the town homes in the plan would sell at market rate for from roughly $350,000 to $450,000.

Mr. Marino said that during community planning meetings when that price range was mentioned, "We got a number of gasps in the room from community residents who assumed, 'Gee, that's not for me, I couldn't afford it.'"

He added that the city wanted to "minimize displacement and prevent the perception of gentrification."

But Mr. Hunter, noting that the property involved is now in industrial, not residential, uses, said, "I was not talking about gentrification and displacement." This is about how to develop a new neighborhood to be diverse, he said.

Commission Vice Chair James Woods said, "Some of these townhouse developments [in the plan] start to look very suburban in character. They don't maintain the kind of urban context that I would expect to find in these neighborhoods."

"I'd ask you to consider some of the more traditional, inner-city style developments that you see in Baltimore, Philadelphia, Boston and London," he added.

Commissioner Doetsch said the designs showed porches that were too small and set too far back from the street.

"From a new urbanist perspective," he said, "I think you want eyes on the street and people to be sitting on the porches out interacting with the neighbors. But some designs here have no porches and others have mini-porches that you can barely get a chair on."

The commission is scheduled to continue its discussion of the west side plans at its Dec. 13 meeting.

The draft plans presented to the Plan Commission for subareas 1,Â 2 andÂ 3Â are attached below, along with the real estate market analysis used in developing the plans.