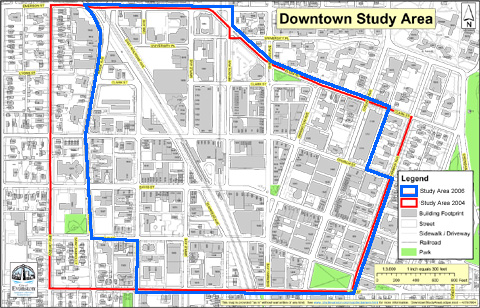 City planners say the change would have no direct impact on what can be built in the area â€“ that’s controlled by the zoning code.

But it may make a difference in what areas get special services like frequent street and sidewalk cleaning, what areas receive special downtown street furniture, signage, lighting and other amenities, and what areas are included in special tax districts to pay for all that.

Assistant Planning Director Dennis Marino said residents between Ridge and Asbury Avenues, in the blocks from Emerson Street south to Lake Street, â€œhave sent in some cards and lettersâ€ voicing concern about the boundary being that far west.

Although that area has been considered part of downtown at least since adoption of the city’s 1989 general plan and through a downtown study conducted in 2004, the commission members decided to exclude it now.

Associate Commissioner David Galloway said, â€œfrom a perception standpoint, for me the boundary is Ridge Avenue and certainly nothing further west. Ridge serves as a visual, emotional and psychological line of demarcation.â€

Except for the Methodist pension board offices at Davis Street, that area is generally residential now. The pension board is considering moving out, and if it does, the commissioners speculated, the property might most likely end up being redeveloped for multifamily residential use.

The commissioners also decided that the block bounded by Grove Street, Oak Avenue, Lake Street and Ridge Avenue â€“ which has exclusively residential uses â€“ should be excluded from the downtown district. At the opposite end of downtown they excluded the half-block bounded by Clark Street, Hinman Avenue, Church Street and the alley east of Chicago Avenue for the same reason.

The commissioners considered expanding the downtown district to include the properties from Elgin Road to Emerson Street between Sherman and Benson Avenues. But they concluded that area is unlikely to be redeveloped soon, and it now serves the role of a neighborhood business district rather than being part of the downtown core.

The existing Special Service Area tax districts have boundaries that are significantly smaller than either the new or old definition of the downtown district, but the tax district boundaries may be redrawn as the districts come up for renewal in the next few years.

Under the new proposal from the plan commissioners, the revised northern boundary of downtown would start at the corner of Emerson Street and Green Bay Road, run east on Emerson to Benson Avenue, south to Elgin Road, and then east on Elgin and Clark Street to the alley east of Chicago Avenue.

The east boundary would run down the alley to Church Street, east on Church to Hinman Avenue and south on Hinman to Lake Street.

The south boundary would run west on Lake Street to Oak Avenue, north to Grove and west to Ridge Avenue.

The west boundary would run north on Ridge Avenue and then turn west to the intersection of Green Bay and Emerson.

The changes would require approval of the full plan commission and the city council to become effective.

The commission’s downtown committee plans to continue its discussions at 8 a.m., Thursday, March 30, when it will consider different sub-areas within downtown and take a closer look at the north end of Research Park where a number of development projects are in the works.