Looking east two blocks toward the Sherman Plaza construction site from the intersection of Davis Street and Oak Avenue.

Associate Plan Commissioner David Galloway says those areas have the traditional look of a downtown commercial district â€“ with one to four story buildings.

The plan commissioners intend to ask the city’s Preservation Commission to analyze the buildinngs on those blocks to determine whether they are of sufficient quality and are in good enough condition to deserve preservation. 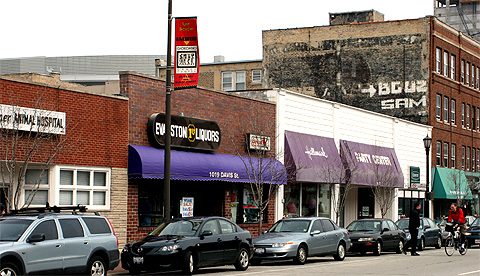 Some of the Davis Street buildings that might be considered for preservation.

Jonathan Perman, executive director of the Evanston Chamber of Commerce, says the chamber is not in favor of such restrictions.

â€œThese areas are just a block or two from mass transit,â€ he said, â€œI don’t know why you’d want to keep those areas low-rise.â€

Plan Commissioner Larry Widmayer has suggested that one reason for maintaining some older, low-rise sections of downtown is that they offer lower rents to retail tenants and thus are affordable to local businesses that often are priced out of new developments â€“ which rent instead to national or regional chains.

But Mr. Perman said that isn’t necessarily the case â€“ pointing to the new condominium building at 900 Chicago Ave., at the corner of Main Street, which has rented its ground floor retail space to local businesses from the neighborhood. 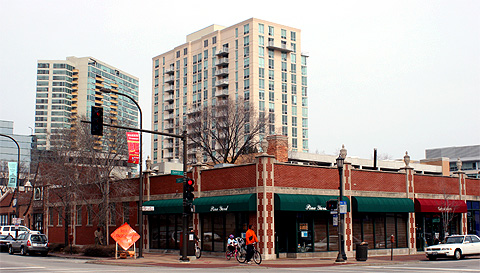 Looking northeast from Davis and Oak toward high-rise buildings on Church Street and beyond.

The area east of the post office on Davis is bracketed by already-constructed high-rise developments on Church Street and an approved 15-story condo project to be built at 1567 Maple Ave.

The Downtown Plan Subcommittee is scheduled to continue its discussion of possible downzoning and rules for transitional districts at the edge of downtown when it meets at 8 a.m. on Tuesday, April 11, at the Civic Center.