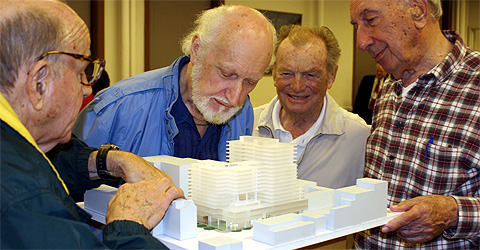 The Plan Commission tonight cast preliminary votes to reject both the Smithfield Properties proposal to redevelop the Kendall College site and the Optima Promenade proposal for 1515 Chicago Ave.

Neighbors gather around a model of the Optima Promenade project at the Plan Commission hearing to envision how close it would be to their homes.

On the Kendall property commission members said they were unhappy with the developer’s plan to demolish all the existing buildings on the site, but that they also opposed calls by neighbors to have the entire property rezoned for R-1 single family use.

Instead, the commissioners said they would favor a proposal that would convert the old Kendall College administration building, constructed a century ago as the Swedish Methodist Episcopal Theological Seminary, into condominiums; construct new townhouses along the remaining Orrington Avenue frontage, and build new single-family homes on the rest of the site.

The commissioners praised the design of the Optima Promenade project. But they said it needed revisions to reduce its mass, provide greater setbacks from the alley and the adjoining property to south and improve access to the street-level retail space on Chicago Avenue. Most of the commissioners appeared to also favor reducing the height of the building to 14 stories from the 18 stories the developer proposed.

Fourteen stories is the height permitted in the zoning ordinance for a property on that site after adding in parking garage allowances but without the optional bonus of up to four stories allowed planned developments in return for public benefits.

The commission is scheduled to take a formal vote on both projects when it meets again on June 14.

The Plan Commission’s recommendations are advisory. The final decision on the projects are up to the City Council.