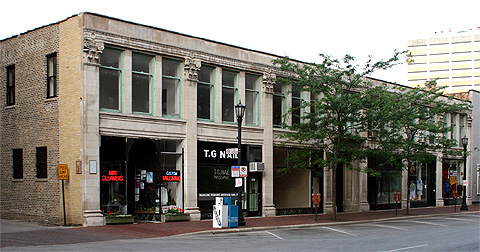 Evanston Plan Commission members split Wednesday over whether a two-story building on Davis Street should be down zoned to block its redevelopment.

The building at 518-526 Davis St. was recently purchased by Ted Mavrakis, who also owns the Fountain Square building at 1601 Sherman Ave.

Under current D4 zoning a mixed-use building on the site could rise as high as 145 feet with parking allowances.

The draft downtown plan would reduce that to a maximum of 10 stories, making it part of what's called the East Edge zone.

But some commissioners, who like the 1920s vintage building's limestone facade, proposed adding it to the nearby South Traditional Zone, which would cut the maximum height to 5 stories.

Commissioner Robin Schuldenfrei said "it would create a nice transition" into the traditional zone.

But Commissioner Charles Staley said the reduction would be out of character because the property is just across the street from the eight-story North Shore Hotel and just west of the nine-story 500 Davis Street building.

Commission Vice Chair Stuart Opdycke said he likes the existing building, but asked, "Are you going to tell the owner that the most he can put up there is three stories or maybe five" with bonuses?

Commissioner Colleen Burrus said that would be more height that is there now. But Staley said "basically you're using a traditional zone to landmark his building."

Commissioner Johanna Nyden said the city should think about preserving traditional elements of its public space "and not necessarily think about every last building owner."

Commissioner Larry Widmayer said other areas proposed for traditional zoning are generally zoned to lower height levels now. He said extending such zoning to areas that currently have much higher base limits would break that pattern.

The commissioners failed to reach agreement on how to handle the parcel and decided to postpone a decision on it to a later meeting — what Opdycke described as a "high noon session" on unresolved issues.

The next Plan Commission meeting on the downtown plan is scheduled for March 12.

The commissioners did decide to leave a set of landmarked apartment building on the east side of Ridge Avenue between Church and Davis Streets in the proposed West Edge zone rather than move them into the plan's West Traditional zone.

The switch would have reduced the maximum height allowed from 10 stories to five. But it also would have required commercial uses on the ground floor of any new structures built on the site, a change the commissioners agreed would not be desirable.

The parcels are currently zoned R6, which permits a maximum height of 85 feet.