Plan Commission members today continued efforts to define where high-rise buildings should not be located downtown, and what should be permitted in those places instead.

Planner Dennis Marino and Plan Commissioner Stuart Opdycke watch as Anne Earle identifies potential landmark buildings on a downtown map.
Today the planners tried to sort out the historical merits of buildings downtown that don’t already have landmark status with the help of Anne Earle, an associate member of the Preservation Commission, and Preservation Planner Carlos Ruiz.

The two-story building at 708 Church St. that spans the block between Orrington and Sherman drew special attention. Ms. Earle said it was built in 1923 and designed by architect John A. Nyden, who also designed the adjoining three-story Hahn building to the south, built in 1927, which already has landmark status. 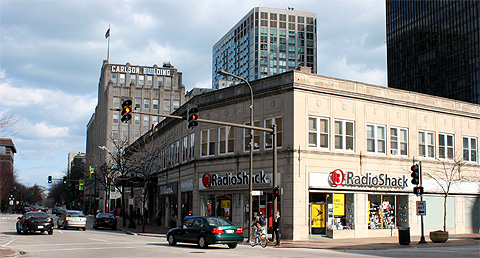 The 708 Church St. building, with the Carlson Building and other much taller neighbors on the next block east.

"It’s not as strong as the Hahn building," she said, "It’s a lot plainer. But I think it’s worthy of landmark designation and will recommend it to the Preservation Commission at its next meeting." 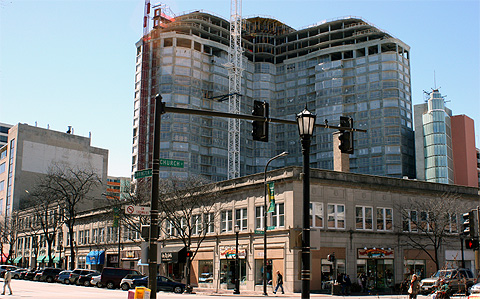 The Orrington Avenue side of the 708 Church St. building, with the Hahn building and the Fountain Square building to the right, and Sherman Plaza on the next block west.

She also suggested that some buildings at Sherman Avenue and Grove Street have potential merit as landmarks.

Planner Dennis Marino said, "We have to be careful about older, smaller buildings that need major improvement or changes and what additional economic burden we place on the owners." In some areas, he added, it may be more the style or scale of buildings that should be preserved, rather than the existing structures themselves.

Ms. Earle said the Preservation Commission had in the past decided not to landmark the North Shore Hotel at 1611 Chicago Ave., because of changes to its facade, including replacement windows and the addition of air conditioners to the window openings.

But since that decision was made, preservation standards have changed to recognize that change is part of the life of a building, so perhaps it would qualify now, she said.

After proposing in March to shrink the size of the area officially considered downtown, members of the Downtown Plan Committee have identified several transitional and traditional areas they believe need special attention. The transitional areas are on the outer edges of downtown. They include:

The committee today agreed that height and density in those areas should "reflect their purpose as a transition from the downtown core to surrounding lower density residnetial neighborhoods." But it hasn’t attached any numbers to that general definition. The three traditional areas are:

The committee members agreed that "redevelopment should reflect the existing character, height and density" of those areas.

The committee will hold its next meeting at 8 a.m. on Tuesday, June 6, in Room 2404 of the Civic Center.

A copy of the map the planners worked from at today’s meeting is available by clicking on the attachment link below. Update 5/11/06: A black-and-white, letter-size version of the map is also attached.