Details on tonight's agenda items can be found here.

Special uses for a gas station at 2400 Main Street. The Zoning Board of Appeals has recommended approval.

Developer is Food4Less, operator of the supermarket at the Main Street Marketplace site.

Alderman Ann Rainey, 8th Ward, says it looks like the little stores in the development are just going to be wiped out visually. 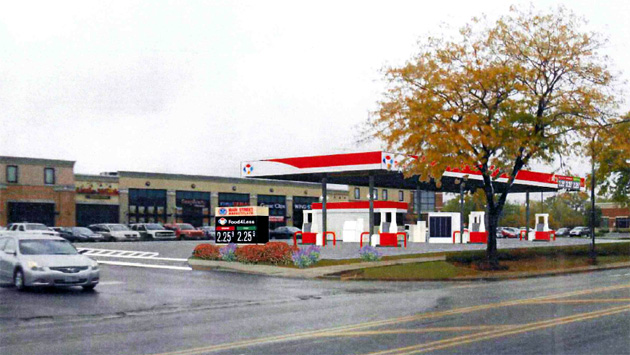 A rendering of the proposed gas station.

Alderman Melissa Wynne, 3rd Ward, says she's concerned about having public restrooms that would be open to the parking lot. Doesn't think that's attractive or safe for customers.

Food4Less representative says it's only there because it's their understanding that the city code requires it.

Rainey says there are eight gas stations in or near her ward and they're some of the biggest problems in town. Says should have mature employees there — not somebody just taken off the food store cash register.

Gas station site is a vacant outlot now. Company representative says the development will cost about $1 million. Says it will provide discounted gas to all consumers — unlike the Sam's Club gas station further south in the development that only sells to members.

Says there's also a gas discount program for shoppers at the grocery stores.

Developer says the gas station building will not be accessible to patrons. Will offer cigarettes and candy and soft drinks.

Discussion item on how the council wants to handle proposed amendments to the planned developments to those sites.

Stamata Blanas, nearby resident, objects to elimination of commercial property from the site. Says it won't create opportunity for job growth in landlocked town.

Says better to subsidize office space rather than rental apartments.

Ken Brown, president of Ivy Court homwonwers association, across from the 1890 Maple building. Says concerned about the development. Says thinks the shift to rentals will be a negative for the community.

Tina Paden, 1122 Emerson St., says she was opposed to the original development plan and is still opposed to this one. Says traffic is horrendous near Emerson and Ridge.

Says area looks bad now and this project will make it look worse.

Betty Ester, 2130 Church St., asks whether inclusionary zoning ordinance should be triggered by the new development.

Alderman Delores Holmes, 5th Ward, says traffic signal improvement was going to be put in as part of the development, which so far hasn't happened.

Planning Director Dennis Marino says agreement was for developer to put up $150K for traffic signal improvements. Says has made voluntary $200K contribution to affordable housing program and youth job training. Says that because new proposal is for rentals the required contribution to affordable housing program doesn't apply — only applies to ownership units.

City attorney Grant Farrar says the proposal doesn't necessarily have to go to Plan Commission, because City Council has continuing and final jurisdiction over the issue. But City Council could opt to send it back to PD if it chose.

Alderman Melissa Wynne, 3rd Ward, asks whether any recent developments were sent back to Plan Commission.

Farrar says he doesn't remember any.

Wynne says the changes here seem to be more substantial than the other revisions that have been proposed and approved before. Notes the waterfall that was proposed for the Oak building and that one building, at least, was proposed as condos before.

Farrar says that the issue of what's a major adjustment isn't spelled out in the code — but any adjustment ultimately requires final approval of the City Council.

Says process should be much more clear than it is now in the ordinance.

Griffin says application, if sent to the Plan Commission, would be much more extensive than what would need to be submitted for review by the City Council.

Alderman Delores Holmes, 5th Ward, says doesn't understand what Wynne means about changes in the neighborhood. Suggests there haven't been any new buildings built in the area since the planned development was approved.

Wynne says she was talking about new residents in the existing buildings.

Alderman Judy Fiske, 1st Ward, says she doesn't agree with the conclusion that the project doesn't have to go back to the Plan Commission.

Alderman Peter Braithwaite, whose 2nd Ward includes the site, says he wants the proposal to be on the next avalable Planning and Development Committee meeting, but wants full opportunity for residents to be heard about the proposal.

David Reifman, attorney for the developers, says disagrees with claim that new version is a major change to the project. Says the eight different projects with changes approved before were each heard in the manner that the developer is requesting tonight.

Says the new project is smaller and shorter than what was originally approved.

Says the 1890 building was always proposed as rental. Says problems this project encountered in moving forward are similar to those encountered by the other projects that the council has recently approved changes for.

Number of dwelling units is up 7 percent. At 1700 Ridge council approved 17 percent increase. On Central street an increase of more than 50 percent.

Says the parking ratio is consistent with that approved for other developments.

Says the 1700 Ridge site was originally proposed for two buildings and it was combined into one building when it finally moved forward.

Says the revised project will have less traffic impact than the originally approved project.

Architect Pat Fitzgerald says the project now proposed 12 townhomes along Emerson, more than were proposed in the original development.

Says will still have two separate towers, but will have shared parking and amenity space. 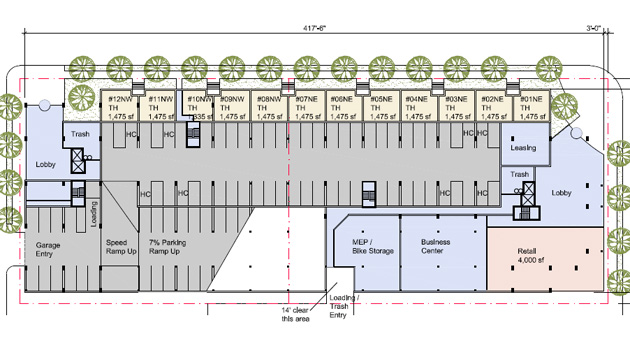 Rendering of first level parking deck for the project.

Rainey says have to get over Trader Joe's and get over the Research Park.

Says one of the properties is an abandoned building, the rest is a vacant lot.

Says there is nothing you can do to make Trader Joe's to go someplace they don't want to be.

So now we have Trader Joe's on Chicago Avenue — which has definitely had a cost to the city.

Says the city has had retail space in the Maple Avenue garage that has sat empty for years.

Says thinks 4K SF of retail is probably pushing it. Hopefully it will get occupied.

Says there is already vacant retail and office space downtown.

Says sending the project back to the Plan Commission could add a six month delay and could kill the project.

Says the objectors from 1720 Maple should be aware that a lot of residents were opposed to having that one built.

Says were told that the theater project would cause gridlock on city streets. Didn't happen.

Says sending back to Plan Commisison would be asking for trouble and anti-economic development.

Says it's a beautiful project. 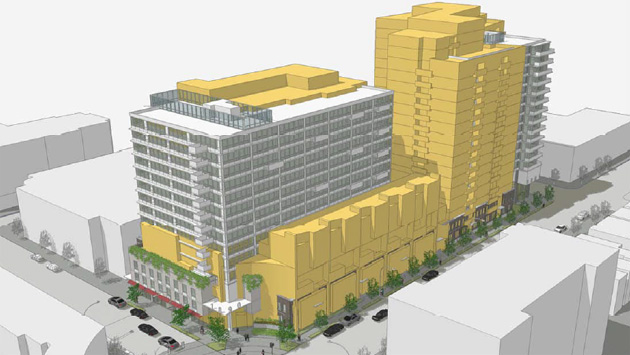 Rendering from the developer shows, in yellow, the area of the original development that would be eliminated in the new design.

Alderman Holmes says she's going to support the project. Based on the presentation, she thinks the changes are less than what's been approved for other developments recently.

Wynne says Plan Commission originally opposed the projects. Wants to have the council re-read what happened at the Plan Commission. Says she voted against both projects when they were approved before.

Alderman Don Wilson, 4th Ward, says he tends to agree with Rainey and that should keep it at council, rather than sending it back to the Plan Commission.

Fiske says she wants to send it back to the Plan Commission, sees that don't have the votes, but is encouraged that will get full hearing before the P&D committee.

Says zoning ordinance clearly calls for sending it back to the Plan Commission, which can give it much more time that aldermen can at the P&D committee.

Rainey moves that the project be placed on the P&D committee for the first meeting in January for the purpose of holding a public hearing.

Moving forward with hearing before Planning and Development Committee carries on 3-2 vote with Fiske and Wynne voting no.

Julie Koehler, 2525 Ashland, says the property she objects to on her block violates existing ordinances and should be stopped.

Several other residents of the neighborhood complain — saying they're not appropriate in a residential neighobrhood.

Background stories on the issue.

Rainey says don't have legislation now that controls this kind of activity now. Says corporation counsel says city can prohibit or regulate them. Need policy decision by the council on what should be done.

Says she can see where could be situations where rentals for months or rweeks might be appropriate. But the behavior and actual practice of it is so destructive that people who are doing the renting have ruined it for everybody.

Asks how would enforce rentals. How would know, unless neighbors saying somebody's misbehaving.

Holmes says need licensing to be able to enforce, otherwise dependent on reports from residents.

Wynne says should ban vacation rentals. It's easy to catch them, just by looking online. Trying to regulate it she says, is going to be really problemmatic.

Says it's dramatically different than renting to a tenant for a year who you'd obviously screen.

Wilson says maybe a college student takes two months to study overseas and sublets the unit …that's probably not going to be a problem. But shorter term would be.

May depend on whether the owner is there.

Doesn't think the licensing tool is going to be sufficient. Says revolving weekend parties should be prohibited. Will require some in-depth and careful consideration beyond just a blanket ban.

Says she'd be all for banning them. But if look at somebody going on sabbatical …. if don't want to ban those. Don't think there's a quick solution to manage this.

Wynne says could say just prohibit rentals for less than a week.

Farrar says may want to move forward with a proposal for a ban. To do that, he says, would want to create a stand-along category. Wants to look at what other communities have done as well.

Says doesn't think current definitions give the enforcement tools to enforce on consistent basis. Concerned about the equal protection argument.

Says Palm Beach and New York have banned them — can look to those.

Wynne says should have staff move forward with a ban, with exceptions as Wilson and Holmes proposed for longer-time ones.

Fiske says she supports a ban, and licensing. Says licensing would assure that there are safety provisions in place for the renters.