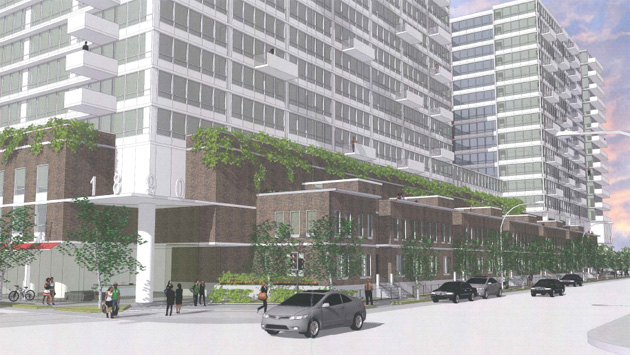 A packet with information about tonight's agenda items is available online.

Some background available in this story and this one.

Top: A rendering of the proposed development.

Says will have very high quality finishes in the apartments. Says because the revised development is shorter than the originally approved plan, they will interfere less with the views from the nearby Optima Views development.

Architect Patrick FitzGerald says the new plan is 20 percent smaller in square footage terms than the original project. Says it will be a LEED silver building. Will have car sharing, bicycle storage and green roofs.

Reifman says new traffic study indicates that the project will not result in any increase in traffic congestion.

Traffic consultant from KOLA, Eric Russell, says the city is continuing to seek funding for a signal upgrade along Emerson. In the meantime several steps will be taken to improve conditions. Among other things, parking will be removed on the south side of Emerson, which will permit turning it into a four-lane roadway that should move traffic much more smoothly through the corridor.

The developer says that if the project is approved, construction would start this fall, begining with demolition of the existing three-story building at 1890 Maple. Construction would be completed by fall of 2015.

Alderman Ann Rainey, 8th Ward, asks why the developer is being asked to contribute $150K to traffic congestion on Emerson.

Alderman Melissa Wynne, 3rd Ward, says it was anticipated that there would be a new traffic signal at Oak Avenue and Emerson Street — says the price is about the amount of a traffic signal.

Reifman says the contribution wasn't related to a signal at Oak — says the traffic isn't heavy enough to meet state requirements for a signal there.

Alderman Delores Holmes, 5th Ward, says the issue is traffic flow all through the Emerson corridor.

City Planner Dennis Marino says the $150K is to contribute to the signal modernization program along the entire corridor.

Lynne Heidt, a realtor and owner of two condos at 1720 Maple, says she supports the project and believes it will increase the value of her properties.

Says condos on the site might have damaged the market for existing condos, but rental units will not, Heidt says.

Says a vacant lot creates a burden on all the citizens of Evanston — raises other people's taxes.

Says should welcome new residents who will buy things in stores and pay (parking) tickets.

Terry Wendt, 807 Colfax, says that as someone who's moved back to Evanston recently, would like the additional options for rental housing that the new development would provide. Says it would enhance all the good development downtown that's happened already.

Michael Marin, 1720 Maple, resident of Optima Views, says it's the right time for this project. The developers have adapted the project to meet the market's needs. Says as he's followed the project over the years, he was initially on the fence but not favors it.

Amanda Underwood, 3036 Central St., says she rents in Evanston now and would like to see this development as an additional option for renters.

Bob Brower, 800 Elgin, says the project doesn't fit in its location — calls it a monster in the neighborhood.

Also says he's concerned about the large number of small units in the building — says it will draw a lot of students — transient tenants.

Jeff Smith, 2724 Harrison, says project is too much different from the original plan and it should have gone back to the Plan Commission for review.

Tina Paden, 1122 Emerson, complains about traffic in the area of the development.

Mike McLaughlin, 1720 Maple, says his unit faces south and his view isn't impacted by the project. Says he can't see how can add 1,000 people to the neighborhood without increasing traffic.

Says he would rather see office and research development on the sites that would create new jobs.

Stamata Blanas, 1720 Maple, objects to the process used for approval of the development.

Presentation by mayor of keys to the city to Evanston Hospital representatives for efforts in improving health care for ETHS students. 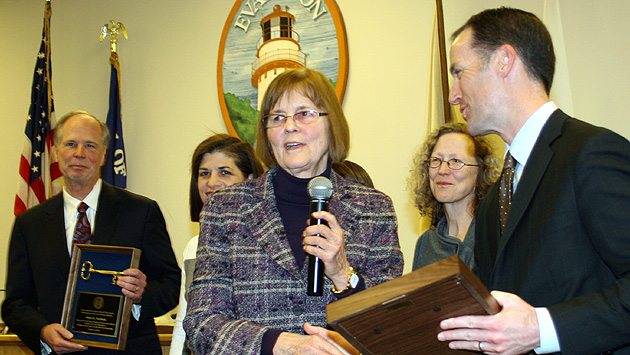 J.P. Gallagher of Evanston Hospital gets his key to the city from Mayor Elizabeth Tisdahl, who says she really likes him because he always agrees with what she asks for.

Back to the planned development discussion…

Alderman Rainey says she's OK with the reduction in retail in the development. Says a lot of effort went into trying to get it, but it just didn't work out. Says the new high-rise rental development at 415 Howard St. doesn't have retail on the first floor and yet looks very active because of all the recreational amenities inside.

Rainey compares this situation to the one at 1515 Chicago Ave., where a developer has torn down a building because the city won't approve the project he wants to build. Here we've got a developer who wants to build — should go for it.

Committee votes 5-0 to send the proposal on to City Council for introduction tonight. Final action won't take place until the meeting two weeks from tonight.

Rainey says she's opposed to "three day rentals for Lollapalooza." But says realtors have told her that it often is necessary to rent for 30 days or less — when closings don't go as planned, etc.

Alderman Judy Fiske, 1st Ward, says that when a prospective buyer has an owner interest in the property, that should be sufficient to take it out of the "vacation rental" category.

Suggests special use as an alternative — but notes that that's not part of the ordinance presented tonight.

Alderman Don Wilson, 4th Ward, says he thinks the staff has misunderstood what the aldermen wanted.

He says there are a spectrum of circumstances that should be considered and that an outright ban wouldn't work.

Says an outright ban wasn't what he had in mind at all.

Jeff Smith notes that he was the attorney who represented a property owner who was doing short term rentals of her property. Says the ban proposal is going after a bug with a bazooka.

Says there are probably no more than a couple dozen at any one time and perhaps 200 over the course of a year.

Says only a couple of properties have raised objections from neighbors.

And all of the 18,000 homeowners in town now have the right to rent out their property. Says most of them have no idea that the council is considering this.

Says the city doesn't have complaints about most of the properties that are being rented out. The stated finding in the ordinance that short term rentals represent a threat to the residents of the city seems without any basis.

Says think it would add to the safety if people are going out of town to have someone be in their property when they're gone on vacation.

Says overall it's not a problem, and arguably it's a plus.

Rainey suggests holding the ordinance "until we get it right"?

Wilson suggests that comments on the proposal be sent to the corporation counsel.

Wilson says there are all manner of exceptions that should. be considered. Says should treat differently properties where the owner would be present, versus one where the owner is out of town.

Holmes says need to go back to the whole licensing thing. How are going to be able to enforce this? she asks.

Wynne says she's worried about enforcement of licensing. Says she wouldn't want to make "owner occupied" a distinction. Can be problems with that, too.

Says need to come up with something fairly soon.

Fiske says heard same arguments when were discussing B&Bs. But thought having licensing and meeting health and safety standards.

Says thinks the owner occupancy part is a very big deal. Thinks that makes it less likely that there will be a  disruptive event, because owners will be responsive to neighbohors.

Rainey agrees with that. Wynne disagrees.

Rainey then changes her mind — says the issue on Ashland does have owner on site at least some of the time.

Rainey says should isolate the vacation rental problem and not confuse it with "landlord licensing." Says could just license vacation rentals — anything less than 30 days.

Suggests taking it from there and seeing how it works. Not make it so onerous that people wouldn't do it.

Wynne says to move quickly should separate vacation rentals from licensing of other landlords.

Committee agrees to have a Saturday morning workshop on short-term rentals at a time to be determined.