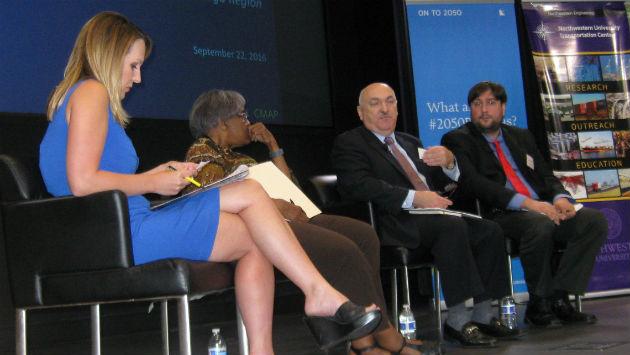 Communities like Evanston need to plan for the driverless car, but how that will impact driver behavior is anybody’s guess.

That was the thrust of remarks by a panel of urban planners at a regional transportation event Thursday at Northwestern University.

The event, titled “Have We Reached Peak Driving?” was one of a series of forums sponsored by the Chicago Metropolitan Agency for Planning that takes a look at a number of issues, including climate, the economy, government, housing, land use and development, transportation, and natural resources, that will have an impact upon the region’s future.

From the end of World War II until 2004, according to Olivieri, the annual vehicle miles traveled (VMT) was on an upward slope. But in 2004, it reversed itself and began to decrease, only to resume the upward trend in 2014, which stymied the planning professionals, for they weren’t sure they knew the reason why the turnaround.

Grimshaw was the only panelist to insist that the driving boom has peaked, as she noted that the number of cars per household had risen to 1.54 at the turn of the new century, but has subsequently decreased to 1.1 per household.

The implication for Evanston is that the number of parking spaces the city requires in apartment buildings might be excessive, although the city requires fewer spaces in transit-oriented developments located near public transportation.

Americans still have a love affair with their automobiles, the panelists noted, although advances in technology, such as bus-trac­ker apps on cell phones, and the availability of low-cost ride-sharing services like Uber and Lyft, and the advent of Divvy bikes, increased the attraction of a household getting by with a  single automobile.

Despite anecdotal evidence that some members of the younger generation are opting not to drive, there appears to be little evidence that this trend is becoming mainstream among the Millennials, born between 1982 and 2000, the panelists noted.

But autonomous vehicles, as driverless cars are called, "is a game-changer," Olivieri insisted. "It's coming, and it's coming soon," he warned

"Avoiding planning because of uncertainties," said Mahmassani, "is the wrong way to go. We must examine the implications of changing scenarios."

The panelists agreed that transportation is "multi-modal" and that the region must consider not only the automobile, but buses, trains, bicycles, and taxis, as well as pedestrians in planning and upgrading the transportation infrastructure.