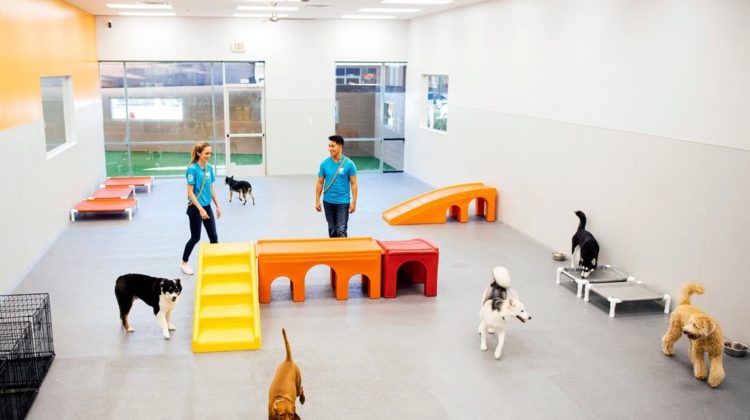 An image of a pet play space from the Dogtopia website.

At least one would-be business owner in Evanston anticipates a lot of people now working from home during the pandemic will head back to the office one of these days and need daycare for their dogs.

Sarah Lewis told members of the Plan Commission Wednesday night that she hopes to open a franchise of the Dogtopia chain of pet daycare and boarding businesses at 900 Clark St. in the Church Street Plaza development.

The site, on the north side of the Century Theatres building, once housed offices of Arthur Hill & Co., the developer of Church Street Plaza. But it’s been vacant since the plaza was sold to new owners in 2013.

The commission voted to recommend City Council approval of a zoning code amendment Lewis sought that would extend the permitted hours of operation for a domestic animal daycare center and make such centers a permitted special use in the site’s Research Park zoning district.

Lewis says she plans to have the business open from 6:30 a.m. to 7 p.m. on weekdays to accommodate commuters and people with varying work schedules with shorter hours on weekends.

The zoning change and special use permit will ultimately require City Council approval.