More parking and a new look are in the works for a proposed condo project at 1881 Oak Ave. as developers respond to neighbors’ complaints.

Developers of Carroll Place said at a Plan Commission hearing last night that they’ve increased the number of parking spaces from 175 to 270 and eliminated proposed retail space on the ground floor.

Developer Robert King said several neighbors at the community meeting last September said, â€œ’We just don’t want any more vacant stores on our block.’ So, with that, retail was gone.â€ 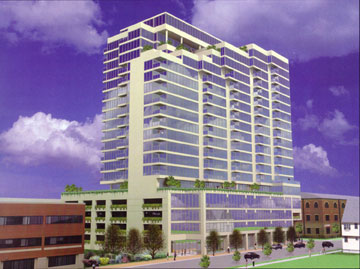 A computer-generated rendering of the new design as viewed from the northeast. (Carroll Place, LLC)

The new plan decreases the number of condos in the project from 175 to 172. To accommodate the extra parking, the building would gain an extra floor and be 19 stories tall.

Parking would begin in the basement and continue through the fourth floor. The fifth floor would be used for common areas and condo units would start on the sixth floor.

The redesigned project also has a new look. The original proposal called for an L shaped building with solid faces and projecting balconies on Oak and Emerson and a raised terrace on the south and east sides.

Architect Fritz Biederman said the new design features a series of step backs in the facade on each side of the building starting at the fifth floor level.
That provides balconies facing the lake for most units, without having the balconies project out from the facade.

He said the design, now in its sixth iteration, had evolved through a series of meetings with city officials and the local architecture group Design Evanston, as well as the neighborhood meeting. â€œThe original L-shaped building was hated by a lot of the people there,â€ he said.

â€œWe started with a base that was primarily masonry,â€ Mr. Biederman said. â€œComments came back that it looked too massive.â€

â€œThe exterior is now 90 percent high efficiency glass,â€ he said, â€œit’s quite transparent and quite an elegant building.â€

Mr. King said the project would generate an estimated $1.34 million in property tax revenue annually, compared to the $35,000 the vacant lot yields in taxes now.

Mr. Newman added that the TIF district that includes the site will be near its 2008 expiration date by the time the project is completed, so the schools will start sharing in the tax benefits of the project almost immediately.

The developer’s traffic consultant said the new project would generate 25 to 40 percent less traffic than the office building previously approved for the site but never built. But he suggested eliminating several on-street parking spaces on Oak Avenue and Emerson Street to improve sight lines for drivers entering Emerson.

But Tina Paden, of 1122 Emerson St., said traffic conditions in the area â€œare terrible right nowâ€ with many accidents along Emerson between Ridge Avenue and Oak.

She added that parking is very tight and removing on-street spaces, as the developer proposes, would make the situation worse.

Developers are requesting several exceptions from current zoning rules. Their building would be 210 feet tall, compared to what they said was a 150-foot limit in the Research Park zone. But they pointed to other buildings as tall as 28 stories in the downtown area nearby.

The Rev. Oscar Crear of Ebenezer AME Church, across Emerson Street from the site, said church trustees favor the plan, and have received a promise from the developer that church members will be able to park in the new building’s garage for Sunday church services.

The commission is scheduled to continue its hearing on the Carroll Place project on Monday evening, Jan. 30.