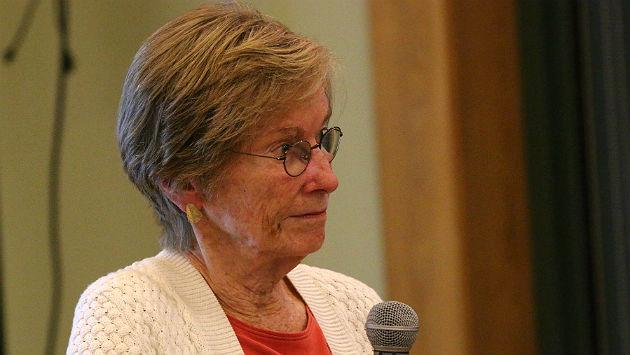 Evanston Alderman Eleanor Revelle told residents at her 7th Ward meeting Thursday night that officials have been meeting for many months to develop plans to deal with crowds expected for the upcoming Oct. 18 Friday night football game between Northwestern University and Ohio State.

Northwestern “is not happy about the schedule” for the televised game, Revelle said, but the scheduled is set by the Big Ten Conference.

Revelle said workers at Evanston Hospital who normally park in the Ryan Field lot will be parking at remote locations near Old Orchard and taking shuttle buses to and from the hospital that day.

Highlights of the game-day planning shown at the meeting.

She said much of therush hour traffic that normally fills westbound Central Street in the late afternoon comes from Northwestern University staff — and those workers will be encouraged to use different routes that day.

Game-day parking rates will start at noon for the commuter parking lot along Poplar Avenue, but commuters who arrive before then will be able to park for the full day at normal rates, Revelle said.

She said NU parking lots for football fans and parking on the golf course will open at 3:30 p.m.

That led some residents to question the impact on school buses from the public schools in the area. Revelle said one more planning meeting is scheduled before the game and she’d ask about that and safety for children in crosswalks at that session.

But she assured residents that there will be “lots of extra police and security” for the event.

Residents at the meeting continued to voice opposition to NU’s request to the city to permit a two-year trial of holding a limited number of commercial entertainment and sports events at the Welsh-Ryan Arena.

The Plan Commission voted 4-2 to recommend approval of the plan earlier this month and the proposal will be discussed by the City Council’s Planning and Development Committee on Oct. 28.

Assuming it is approved then by the seven-member committee, it would be scheduled for final City Council action on Nov. 11.

Revelle said she believed a couple of aldermen favor the plan and a couple of others oppose it, but she doesn’t know how the others are inclined to vote.

She suggested that opponents of the plan, which calls for a cap of 7,000 spectators at the new events, should stop using football games, which can draw north of 40,000 spectators, as their point of comparison when they urge other aldermen to reject it. “Compare it to basketball games,” she said. “A football game isn’t comparable to these special events.”