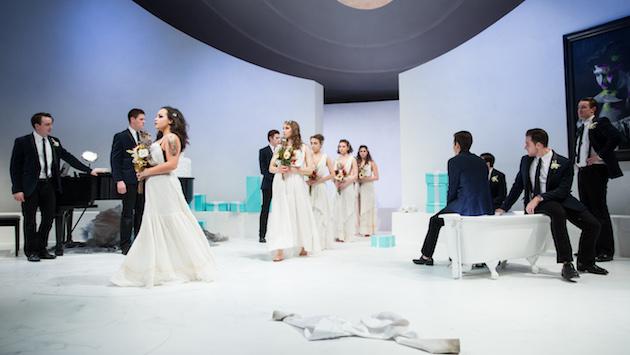 Chuck Mee, playwright of hits including “Big Love” and “bobrauschenbergamerica”, spoke with Evanston Now regarding his artistic practice and his “re-made” style of writing.

Northwestern is currently producing Mee’s “Big Love” under the direction of graduate student Gina Marie Hayes. “He uses history to further his own end,” says Hayes of Mee’s writing style. “So all of the base of Greek tragedy is still there and is accessible for us, but we can take what we like, so it serves us without hemming us in.”

“People who believe in God believe that God created the universe; created something out of nothing,” said Mee. “But we human beings start with a world that’s already been created, so we’re born into a world that has civilizations and histories and music and painting and families, so by the time we’re a few years old, we’ve already absorbed a tremendous amount. So we’re not making something out of nothing — we’re remaking.”

Remaking is Mee’s playwriting mantra, as well as the name of his online collage of plays: the (re)making project. All of Mee’s works are uploaded to this website, and are available for reading and to be manipulated and rewritten by intrepid playwrights and theatre artists.

“Back a million years ago, in the early 90’s, I did a version of ‘Orestes’ by taking the Greek play and tossing into it a lot of texts from the present day,” said Mee. “I was thinking, I don’t know that I can copyright this thing, can quite claim this as my own original work. So that’s why I thought — and I was working in the publishing business, and the internet was just being born — wow, let’s put 'Orestes' on there.”

“This relates to the years I spent writing history books, where I would write a book with my ideas about what happened and what it meant, how to think about it,” Mee continued. “When you write a book of history, you quote sources exactly how they came to you. I think of my appropriated texts as evidence of who and how we are today. I toss texts into the play and have to deal with that, I don’t get to change them.”

Mee has continued the sharing, with over 30 plays available on the (re)making website. “People can do faithful productions or remake them the way they want to. The fun, selfish thing I get out of that is that I get to see what people do when they remake my plays, what Euripides never got to see.”

Visionaries like Anne Bogart of SITI Company have remade Mee’s work for their own productions. “People everywhere take them off my website. Not long ago, Anne Bogart took the plays set in French cafes and did a play called ‘Café Variations’, the way she wanted to do… as no two snowflakes are alike, no two human minds are alike; things come out in a unique way. Any art is both received and original at the same time.”

Directors like Gina Hayes crave Mee’s appropriated texts and the option of adding their own flair to an already composite piece. “[Mee’s] style is collage, and that’s the way I direct,” said Hayes. “I grab a visual or a song, and smash ‘em all together and see what happens. It’s very raw. The visuals [in 'Big Love'] are very, very beautiful, and the contrast of this gorgeous scenery and costumes with the play is interesting, and very ragged.”

“Big Love” is Mee’s adaptation of "The Suppliant Women" by Aeschylus, in which a multitude of brides flee their husbands, only to realize that it will take more than flight to escape their wedding day. Tragedy ensues when the brides scheme to fix the situation. “It’s about what tragic does to us,” said Hayes. “There’s an immediacy to it. There’s one speech about dreams. These two characters are trying to kill each other, but they want each other, and they eventually have to dance it out, but the way it’s told is exactly like a dream. It feels like the anxiety of not knowing.”

Hayes is excited and confident in the text of “Big Love”. “This play is going to touch a chord in an audience that won’t if it was straight Aeschylus,” she said. “Every time I think I have a question, the play solves it for me.”

Mee, on the other hand, believes his texts are but a drop in the bucket of the collective human experience, mediated by one writer. In his plays, “there isn’t one authoritative voice. There’s a culture of multiple ways of thinking and believing, so I like a play that isn’t presenting one way of thinking,” he said.

“I’m always working on several things at the same time, so that I’m not just thinking, ‘I have to work on that damn thing again.’ If I’m working on several pieces, I can do this, this, and this. I like to spend a few years or a year on something so that, before I think it’s finished, I’ve gone back to work on it in every mood I ever feel in life. And if it’s been approved by all those moods, then I call it finished.”

Mee presses home the individuality of writing — and other jobs and disciplines — with words of wisdom that he repeats to his students and himself frequently: “Do what you love. You are the world’s greatest expert in what you love; you know. And since you’re not from Mars, one or two other people will love it too.”

“Big Love” runs through Feb. 7 at Northwestern’s Josephine Louis Theatre, 20 Arts Circle Drive, Evanston, IL. Tickets can be purchased at 847-491-7282 or on the Wirtz Center website.