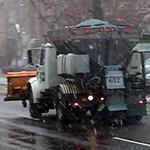 It looks like we'll have no let up in the snow until Friday. As of an hour ago the total for the storm in Evanston stood at 7-point-8 inches.

The National Weather Service says another one to three inches is likely tonight with another three to eight inches arriving on Thursday.

"We have plowed main routes multiple times and most side streets at least once," Maiworm says, adding, "We will continue to plow around the clock until the snow ends."

He says he expects a snow emergency will be declared early Thursday, "which will give us the opportunity to clean the streets curb to curb."

Mostly sunny, though, on Friday, but with continued cold and windy conditions.