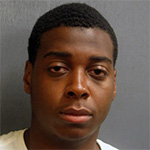 Evanston police say a security guard working an overnight shift in the 1200 block of Sheridan Road found a burglar in his car early this morning.

Police Cmdr. Jay Parrott says the guard, a Des Plaines resident, told officers that the suspect had opened the car's glove box and was holding the guard's cell phone when he spotted him and detained him until police arrived.