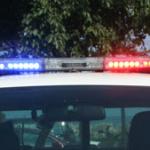 Evanston police say an 18-year-old has been charged with attempted burglary after he was spotted hiding behind a vehicle in the 2600 block of Central Street early this morning.

Cmdr. Jay Parrott says that police, responding to a call of a car alarm going off on the block about 2:49 a.m., spotted Dauphin Erner, who lives in the 2100 block of Darrow Avenue, hiding there.

When Erner spotted the police, Parrott says, he started running, but was captured by officers after a brief chase.

Parrott says that after he was taken to the police station, Erner admitted he'd been involved in the burglary attempt.

He's scheduled to appear in Skokie district court on Sept. 11.