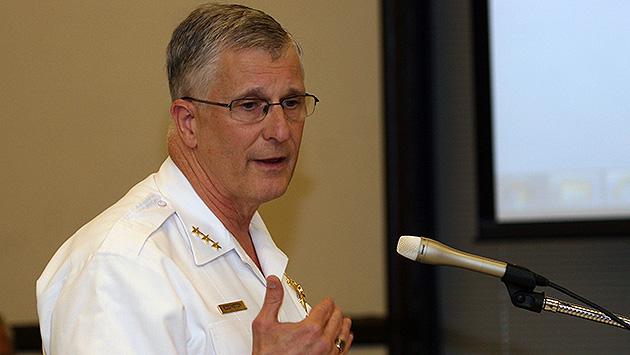 Eddington, speaking at this week's City Council meeting, said he's expanded the department's Problem Solving Team program into a Community Strategies Division — and increased the unit's staffing from six officers and one superivisor to eight officers and two supervisors.

Cmdr. James Pickett and Sgt. Mel Collier will head the expanded unit which will also double, to two, the number of officers assigned to the 5th Ward, where many of the recent incidents have occurred.

The chief also noted that despite some recent high-profile incidents, crimes reportable to the FBI are down 6.8 percent in Evanston through the end of May compared to the same period last year,

Eddington pointed to a number of other initiatives designed to reduce crime, including:

The chief said the expanded stop-and-frisk program has already had some effect.

He said officers in the Neighborhood Enforcement Team have had several discussions with individuals who they focus their efforts on who are now saying "'We know we're going to get searched all the time.'"

"If they know they're at risk for carrying illegal guns, they won't carry them, and that should drive down the number of shootings," Eddington said.

Of the planned gun buyback program on June 29, Eddington said, "We know we're not going to have gangbangers standing in line for their $100."

But for people who may have inherited a gun from a family member, it will provide a legal option for turning in that firearm.

"We're trying to subtract those loose firearms from the equation, and prevent those guns from becoming burglary proceeds and tragedies in the future," the chief added.

Eddington said he's also appointed Cmdr. Jay Parrott to a new role as the department's executive officer in which one of his tasks will be to beef up the department's ability to communicate to the community through social medial.

He says that after learning how critical social media was following the Boston Marathon bombing this year to let police communicate directly with thousands of people near the bombing scene, we wants to have Evanston be in the forefront in using those tools among mid-size cities.