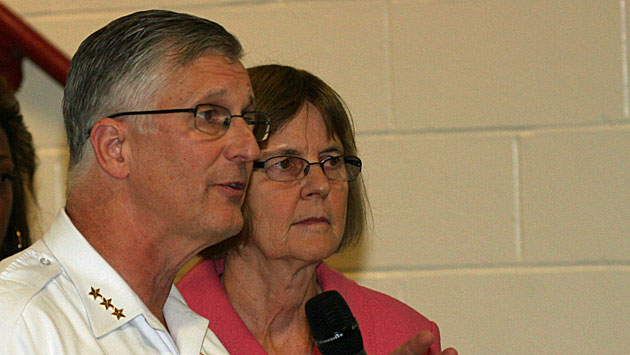 Evanston Police Chief Richard Eddington has some advice for parents planning to host a party for their teenagers.

Police Chief Richard Eddington, with Mayor Elizabeth Tisdahl, as he speaks at the anti-violence meeting.

Evanston Police Chief Richard Eddington has some advice for parents planning to host a party for their teenagers.

"You need more than one adult chaperone," Eddington told the hundreds of people gathered at an anti-violence meeting Tuesday night.

"The bad stuff happens outside the house," the chief added, "and you need to have enough adults on the property to be aware of what's going on."

The chief also encouraged parents who do host a party to call the police as the event is breaking up, especially if there have been any conflicts among the party-goers.

Police say a dispute among kids leaving a party attended by at least 150 teens in northwest Evanston on Sept. 22 led to the shooting that left 14-year-old Dajae Coleman dead.

The chief also thanked residents for coming forward with information that led to an arrest in the Coleman case and encouraged residents to use the department's anonymous text-a-tip service to provide information.