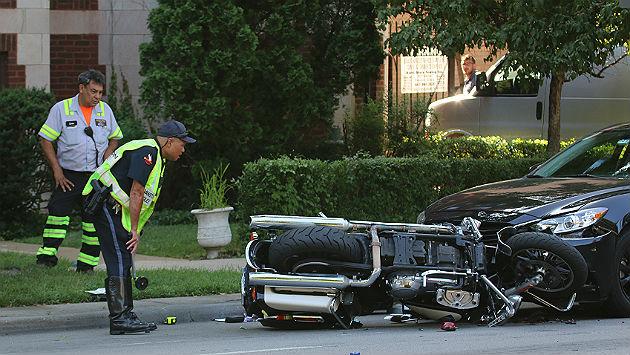 An Evanston police motorcycle was involved in a traffic accident on Ridge Avenue just south of Oakton Street around 8:30 this morning.

Update 9:55 a.m.: Traffic on Ridge Avenue was blocked on between Oakton and Austin streets and Oakton was blocked between Ridge and Asbury for about 90 minutes after the accident.

The officer who’d been riding the motorcycle has been transported to Evanston Hospital.

The motorcycle ended up partially wedged under the front end of a car that appeared to have been traveling northbound on Ridge when the collision occurred.

Motorcycles of other traffic officers parked at the accident scene.

Ridge Avenue has been the scene of increased patrols by motorcycle officers in the department’s traffic unit in recent months in an effort to reduce the high rate of accidents and injuries along the heavily traveled road.

This is also “Speed Awareness Day” in Illinois and the traffic unit was scheduled for additional patrols in connection with that event.