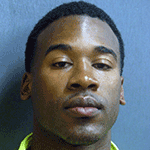 Evanston police arrested a paroled burglar from Rolling Meadows on attempted burglary charges Thursday afternoon after a witness identified him as the man who'd just tried to break into a home in the 900 block of Asbury Avenue.

Police responding to a suspicious person call  about 1 p.m. were told by the witness that a man had just tried to break into a home through a kitchen window.

Cmdr. Jay Parrott says Duane P. Davis, 28, of 4800 Kimball Ave. in Rolling Meadows, briefly tried to elude officers but was taken into custody and subsequently identified by the witness.

Davis was charged with attempted residential burglary and possession of burglary tools.

He's scheduled to appear in Skokie district court at 9 a.m. on May 29.