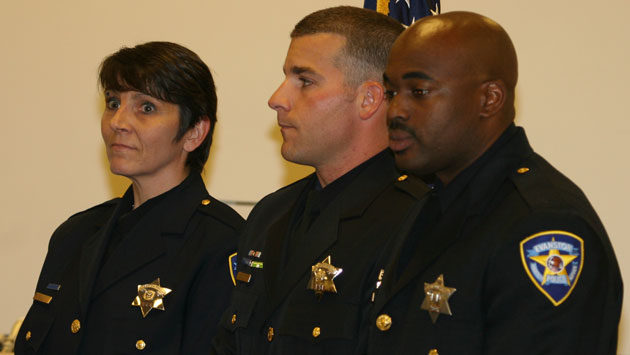 The Evanston Police Department gave out awards to police officers and civilians Thursday night at the Civic Center.

Winning officer of the year honors were Tanya Noble, Brian Rust and Michale Jones, for their efforts in a coordinated campaign to reduce crime problems in the 1900 block of Jackson Avenue in the 5th Ward.

Deputy Police Chief Jeff Jamraz said efforts by the three had led to a 96 percent reduction in calls for police service on the block, from 1181 in a nine-month period from August 2009 to April 2009, to 50 in the same months a year later.

Rust and Jones worked a foot patrol beat in the ward concentrating on the block, while Noble, one of the city's problem-solving officers, worked with landlords, business owners, residents and government agencies to develop a long-term strategy to provide a quality of life acceptable for the residents, Jamraz said.

The program involved arrests to rid the neighborhood of drug dealers, code enforcement action against slumlords, and revocation of housing subsidy vouchers for criminals, as well as conflict resolution workshops targeting issues at home in schools and in the larger community. 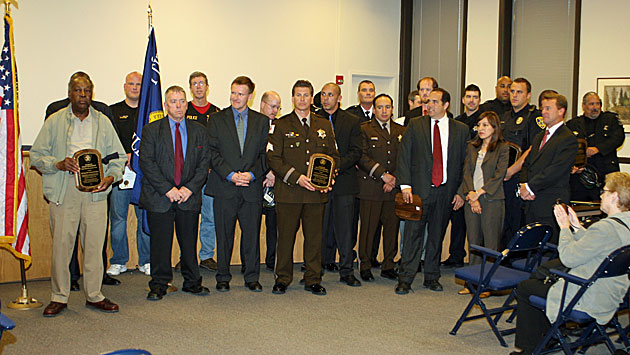 The department also gave a chief's special recognition award to 13 of its own officers and to representatives of several other agencies — including the Cook County Sheriff's Police, the Cook County State's Attorney's office, the U.S. Department of Agriculture, and the Wilmette and Northbrook police departments.

They were all involved in a investigation of activities at Ramy's Foods on Simpson Street, which led to 28 arrests on charges ranging from drug dealing to food stamp fraud. 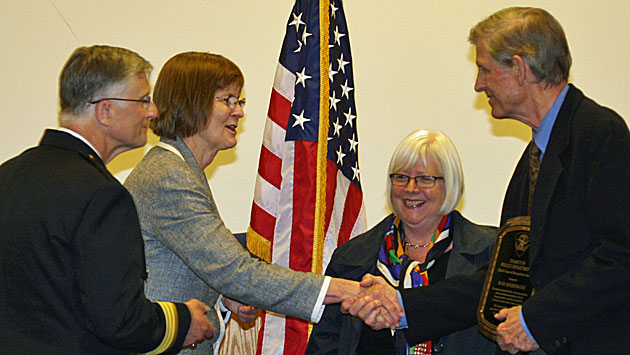 Honored with a chief's special recognition award were Bob and Ann Heiberger of Evanston Bond and Mortgage.

Deputy Chief Tom Cabanski said the 2100 block of Darrow Avenue, just around the corner from Ramy's Foods, had been plagued by crime and chronic nuisance problems for over a decade — with disturbances, drug and alcohol problems, gang loitering and juvenile disorder.

He said in 2007 the police began working with the Heibergers to identify and remove problem tenants in their townhouse building at 2113-15 Darrow, which had become a nucleus for crime and disorder.

"Despite measurable financial losses," Cabanski said, the Heibergers worked to evict problem tenants and refused to renew the leases of anyone involved in criminal activity.

They then began to renovate the aging property.

"The results were remarkable," Cabanski said, "a sweeping reduction in criminal activity and visible improvement in the quality of life" on the block.