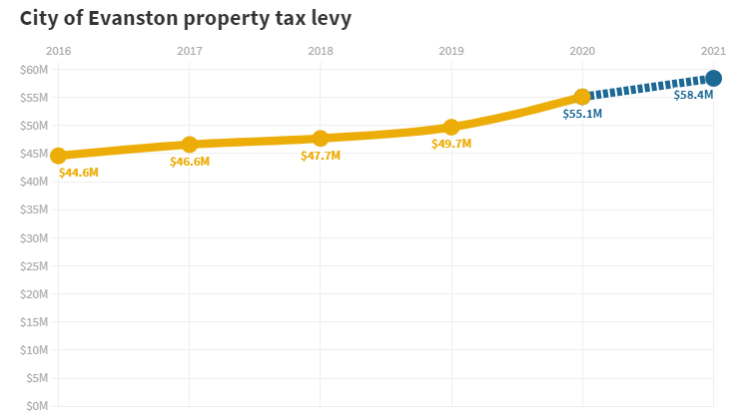 Evanston’s proposed 2021 city budget calls for increasing the property tax levy by just under 6% as many residents, hit hard by pandemic-related layoffs, struggle to meet their mortgage payments.

Other departments will also experience cuts, but on a net basis all the eliminated positions and nearly a quarter of the jobs to be left unfilled next year are in the Police Department.

The police cuts come in the wake of demands by some residents to defund the police — although they are far less severe than many activists may have hoped.

The chart above shows the authorized staffing level for city departments over the past several years and the proposed staffing for next year. It does not show the 26 positions Storlie proposes to leave unfilled next year or positions that were left unfilled in previous years. It includes both general fund and special-purpose fund positions.

The city’s AFSCME workers took 10 furlough days this year and are not being asked to take a reduction in their scheduled 2.5% pay hike next year. Fire union employees earlier this year agreed to postpone pay hikes that had been scheduled for 2021 and 2021.

The city is still discussing possible cost savings with the police bargaining units.

The budget anticipates cutting the planned 2.5% pay hike for non-union city employees to 1.5% and postponing that increase until July 1.

The budget also calls for increases in refuse fees that would be effective July 1. Those would include increasing the monthly cost for a 95-gallon refuse cart from $20.64 to $22.91.

The anticipated revenue losses include $1 million or more each from the state income tax, the sales tax and the hotel tax as well as smaller shortfalls in 11 other revenue sources.

The city has set a goal of having two months of general fund expenses in reserve. or about $19 million. It was already short of that at the start of this year and anticipates falling $2 million more to end 2020 with a $13.6 million general fund reserve.

The 2021 budget anticipates adding $1 million back to the reserves as part of a multi-year plan to get it back to the target amount.

The total net spending planned in the new budget, after adjusting for inter-fund transfers, is $245.1 million. That’s down from $262.8 million this year. The reduction is mainly a reflection of the completion of the new Crown Community Center and water fund capital projects.