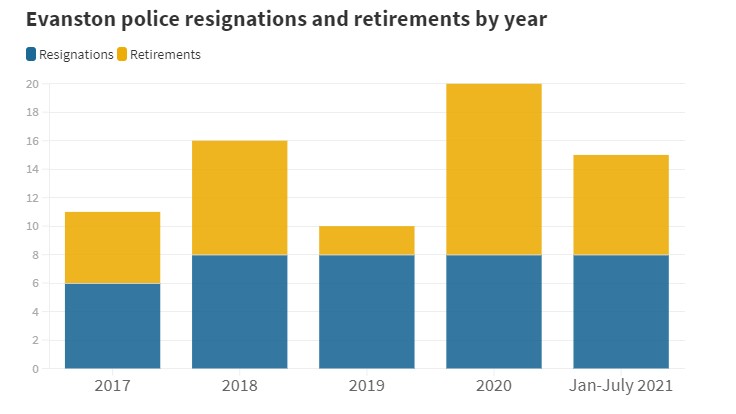 In keeping with a nationwide trend, the number of Evanston police officers leaving the department has increased since “defund the police” protests began in the wake of George Floyd’s murder by a Minneapolis police officer last year.

There has been controversy in Evanston, fueled largely by student groups, over the use of outside police agencies to help Evanston during student demonstrations and over the existence of Northwestern University’s police force.

And the Evanston police force has been downsized in a pandemic-induced retrenchment with 14 vacant positions either eliminated or left unfilled.

Add those local issues to the national picture and you see the environment Evanston’s approximately 150 police officers are facing.

The city, in response to a Freedom of Information request filed by Evanston Now, provided data on police resignations and retirements from 2017 through the first seven months of 2021.

In 2020, however, the total jumped to 20, including the highest retirement number of retirements, 12, during the five-years.

In the first seven months of this year 15 officers had already resigned or retired, with more departures possible in the rest of the year.

It’s important to point out that police officers leave the force for a variety of personal reasons, often related to pension eligibility and level of benefits, not the political climate. In Illinois, officers can usually retire with a full pension at age 50, if they have 20 years on the job.

However, the political climate has changed since the protests began.

Evanston’s Interim Police Chief Aretha Barnes says “there are a myriad of reasons why the staffing has changed,” some of which may be related to recent events, and others which have nothing to do with them.

The Police Executive Research Forum, a national law enforcement study group, recently surveyed nearly 200 police departments of various sizes across the country, to see if “the staffing crisis is a widespread phenomenon, or limited to a small number of departments” such as Seattle, where a record 180 officers left in 2020.

The Forum found that for mid-sized departments, ones with 50 to 249 officers, resignations increased 28% in the 12 months ending in March 2021 over the same period a year earlier and retirements jumped 59%.

Former Evanston Deputy Chief Jay Parrot, now chief in nearby Lincolnwood, says in general, “A lot of police officers in the rank and file feel like we’ve lost a lot of support mechanisms from the public.”

Parrott said he couldn’t comment about Evanston specifically, since he’s been gone from the Evanston force for three years. He also said that in Lincolnwood, support for police is strong.

However, in general, Parrot says the political climate, along with too many criminals with gun records being let out by the courts, adds up to lower police morale in some communities.

“Are police officers held to a higher standard?”, he asks. “Absolutely. We have to be held accountable.”

However, these days, Parrot says, “a lot of officers, depending on where they work, don’t feel supported.”

And if that’s the case, those officers might resign, or retire earlier than they had originally planned.