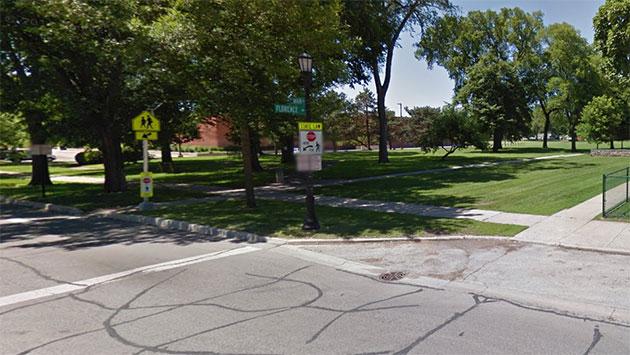 But he told residents at a 2nd Ward meeting Thursday night that the squad car video he viewed first showed that the car that most closely pursued the 15-year-old suspect riding a stolen bicycle through Robert Crown Park was traveling at 16 miles an hour.

"That isn't my guess," Eddington added, saying squad car speedometers are hooked up to the in-car camera system, so the video recording shows the car's actual speed.

Although some residents at the meeting criticized the police response to the incident as what one woman called "Wild West behavior" that put children in the neighborhood at risk, others said they believed that the police have "exercised restraint" and behaved appropriately.

Eddington said the incident began shortly before 5 p.m. Tuesday near Dewey Avenue and Greenwood Street when a 15-year-old boy forced a 16-year-old boy to turn over his cell phone and bicycle.

The 15-year-old, Eddington said, then drew a large pistol and beat the victim about the head — leaving him with "about a quarter-size chunk of scalp gone from his head."

The robber then road off on the victim's bike and was spotted near Dewey Avenue and Crain Street by an officer in one of the patrol cars responding to the robbery report.

The chief said the officer drove after him and saw "saw the young offender fleeing through the park, believed he's armed, and knows he's already done great bodily harm to another juvenile."

The chief suggested that letting the robber get away through the park — where he might have harmed other people or dropped the gun that might have been picked up by another child — wouldn't have been an appropriate response.

So the officer in his car pursued the youth on the bike down the sidewalk running through the park from Lee to Main streets.

"If he [the officer] goes any faster he's going to crash into the rear wheel" of the bike, Eddington says, "And you don't want to hit the bike and possibly injure the juvenile."

As the cyclist got to Main Street, the chief said, he sped up into the street and collided with a passing car, "but pops back up off the ground, grabs his waistband where he had the weapon and ran."

As the chase continued on Florence south from Main Street, "the young man draws the pistol from his waistband," the chief said, adding, "Frankly, at that point in time the officer running behind him could have legally shot him."

But the officer waited, saw him toss the gun away, radioed other officers to say where the gun was and continued the chase, apprehending the youth near Florence Avenue and Madison Street.

Eddington said the gun turned out to be a metal replica, "but in a high-stress situation you wouldn't know the difference between this and a real gun."

Eddington told the residents he would continue to review the incident — including video footage from other police cars involved in the chase "to see if anything could have been done better or if something overzealous was done."

The 15-year-old suspect was charged with aggravated robbery and taken to the Audy Home juvenile facility, but the chief said he had since been released to his mother, subject to a 6 p.m. curfew.

In response to a question about whether "every police car in Evanston" needed to respond to the incident and a claim that "overzealousness creates an atmosphere of the badlands" in the city, Eddington said, "If we were having the same discussion and the crime was a stolen Snicker's bar, that would be different. But here we had an armed felon involved in a brutal assault — and there the balance is radically changed."