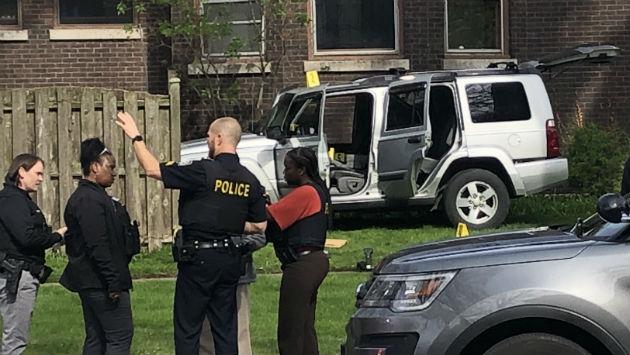 Evanston police have two suspects in custody after shots were fired in the 2100 block of Dewey Avenue around mid-afternoon today.

The suspects, who reportedly fired shots from a car, then fled east in their silver Jeep Commander toward the 700 block of Lincoln Street, where they abandoned the car after crashing it into a fence.

An officer places evidence markers around the abandoned car.

Update 4:00 p.m.: Police have just released the schools from lockdown.

Update 4:53 p.m.: Police say they are not looking for any additional suspects at this time, but that officers and detectives are expected to be in the area of Lincoln and Sherman for a while continuing the investigation.

Update 5:00 p.m.: Police Cmdr. Ryan Glew says the two suspects in custody are male adults. He says a gun was found near the abandoned car.

Glew says an officer on patrol in the area of Payne Street and Dewey Avenue heard the shots fired about 3:22 p.m. He tried to stop the fleeing car but then broke off the chase. Glew says officers later took the two suspects into custody near Central Street and Sherman Avenue. The suspects now have been transported to the Evanston police station.