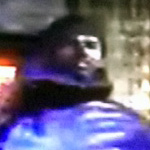 Evanston police are looking for an individual suspected of entering an apartment storage room at 1238 Oak Ave. Wednesday afternoon and stealing the surveillance camera. But not before it snapped his photo.

A resident of the apartments had noted at 9:45 p.m. Wednesday that the signal to the basement security camera had been lost. It was then that he filed a report with Evanston police.

A review of the security camera footage revealed that at 3:51 p.m. an intruder had entered the basement, carrying a bag and a tool. The recording suddenly stopped at 3:55 p.m., which was when the intruder apparently disconnected the $100 camera and removed it from the premises.

Commander Jay Parrott of Evanston police said that nothing else was reported missing from the basement, although the resident who monitored the camera said that he had installed the camera because of some bicycles that other residents had reported stolen earlier.

Anyone who recognizes the individual in the surveillance photo above should call Evanston police at (847) 866-5000, Cmdr. Parrott advised.