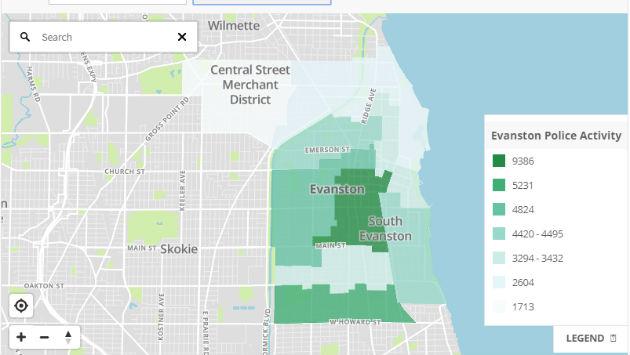 The Evanston Police Department introduced its new online data dashboard to the public this morning at a sparsely attended event at the Civic Center.

Police Cmdr. Ryan Glew said the project — designed to make it easier for residents to learn about the department’s activities — was more than a year in the making and is a result of cooperation between the department and the city’s information technology division.

Glew said the project will evolve as the data available improves and based on feedback from the community.

He noted that there are a variety of limitations in the available data — for example the way officers now report traffic accidents make it impossible to accurately determine which intersections have the most traffic accidents.

And other factors may leave impressions that could be misleading. For example, he said, in the map above, the 4th Ward is shown as having the most police activity.

While that’s partly because the ward includes portions of downtown, which do see a lot of calls for service, it’s also because the police station is in that ward and a lot of routine police activity takes place at the station.

He said the project has turned out to be more work than initially anticipated and he realized, “You have to push it out at some point, recognizing that it’s not going to be perfect or all things to all people.”

Beata said she’d learned a lot from the project that she hopes to apply to making data from other departments more publicly accessible.

“This was a really good, hard project for us to learn those lessons,” she added.

The dashboard is online at cityofevanston.org/police-dashboard. It includes maps and charts on arrests, crime victims and suspects as well as traffic stops, weapons recovered and police use of force incidents.