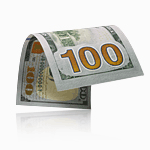 The federal government in recent years has redesigned U.S. currency to make it more difficult to counterfeit, most recently updating the $100 bill, and guides to recognizing the security features in the new bills in all common denominations are available online from a government website and as a .pdf file.

Evanston police say people trying to pass counterfeit money very often use fake $20 bills, offering them in payment for small purchases with the goal of receiving legitimate currency as change. The $20s relatively modest value often does not raise suspicion.

The Evanston Police Department will respond to local businesses that believe they have received counterfeit U.S. currency. A call to police while the suspect is on scene is always the best approach in developing leads for catching counterfeiters.