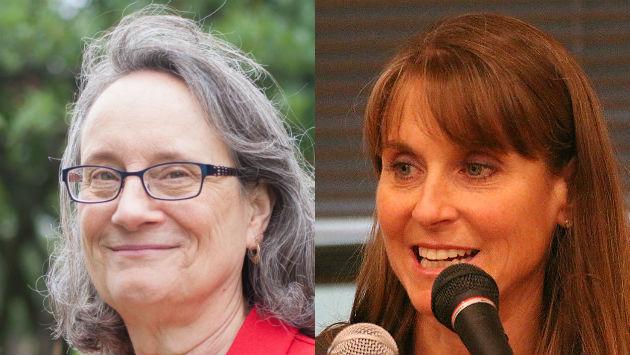 With the run for governor by State Sen. Daniel Biss creating a opening to fill his senate seat, two local politicians have announced plans to try to make a move.

The 17th District includes most of Evanston west of Green Bay Road.

Luecke, a resident of Skokie for more than 30 years, is an attorney who has represented clients in civil rights, disability law and real estate issues. She’s also been active in the Niles Township Democratic Organization.

In a statement she blasted Gov. Rauner for having “repeatedly blocked efforts to pass a fair and equitable budget.”

She said she wants “to be part of a legislature that works together, regardless of party affiliation, to meet the challenges facing Illinois,” and that her top priority would be to “fully and equitably fund our public schools.”

Fine, a former teacher, has focused on insurance industry reform, an interest triggered when insurers refused to pay medical bills after her husband lost his arm when the family car collided with a cement truck.

Kelly has launched a campaign website, but we hadn’t heard he’d entered the race until a reader tipped us about it today.

Kelly, an attorney with a Chicago law firm, describes himself as a “next generation Democrat.” He was an organizer of the community group supporting this spring’s successful District 65 tax hike referendum.