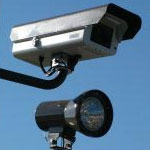 Evanston Alderman Melissa Wynne has asked city staff to find out how much it would cost to equip the city with speed cameras that could automatically ticket motorists exceeding the speed limit.

A new state law that went into effect earlier this year authorizes Chicago, but not other Illinois communities, to install such cameras in safety zones near schools.

Wynne, 3rd Ward, said she's not necessarily advocating for the speed cameras, "but it we have chronic speeding problems, maybe that's what we have to look at."

She said she's seen such cameras in Germany and in Washington, D.Ct.

But Alderman Judy Fiske, 1st Ward, said that people get incredibly angry about the cameras and that she's heard that in Switzerland, where they're also used, some drivers have shot them out.

The camera idea was raised in the midst of a broader discussion at Monday's City Council meeting of ways to further reduce the city's already declining traffic accident numbers — which included better signs at crosswalks, more radar speed displays and adding more curb bump-outs to reduce the width of the roadways pedestrians have to cross.

In Britain, speed cameras have been in use for two decades. The Telegraph, in a recent review of the program, quotes surveys showing that despite complaints, 69 percent of the British public still support their use. But The Sun says town have turned hundreds of the cameras off, in some cases leaving them in place as a silent deterrent.