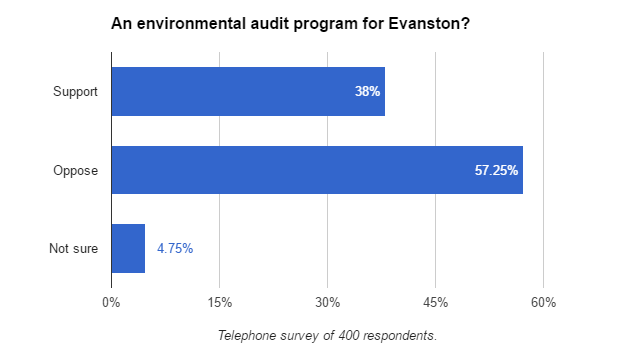 A telephone poll conducted for a realtors group says most Evanstonians surveyed oppose the city's plan to require owners of large buildings in town to report their energy usage to the city.

The survey of 400 Evanston residents found 57 percent opposed the environmental audit program, while 38 percent said they favored it.

The poll was conducted for Illinois Realtors in mid-November by We Ask America with calls placed to cell phone and landline numbers. The polling firm says it has a margin of error of just under 5 percentage points.

The poll results also indicate that most residents weren't familiar with the proposal before they were called by the pollsters. Over 80 percent of respondents said they hadn't heard about the benchmarking plan before, while only 4 percent said they'd heard a lot about it.

The poll also found 53 percent of residents agreeing with the statement that property owners already pay close attention to energy and water costs and that the ordinance "will be just another costly, bureaucratic burden" imposed by the city.

More broadly, nearly 68 percent of respondents to the poll said they thought the city is generally headed in the right direction.

But more than 65 percent said they thought property taxes here are too high.

In an email interview with Evanston Now, Howard Handler, the government affairs director of Illinois Realtors, denied that the survey amounted to a "push poll" designed to sway opinions by using loaded or manipulative questions.

The city is scheduled to hold a workshop on the energy benchmarking program at 8:30 a.m. Tuesday, Dec. 6, in the Parasol Room at the Civic Center.