Donning "Save Our Harbor" stickers, a flotilla of more than a dozen power boaters argued Tuesday for keeping Evanston’s Church Street boat ramp in operation. 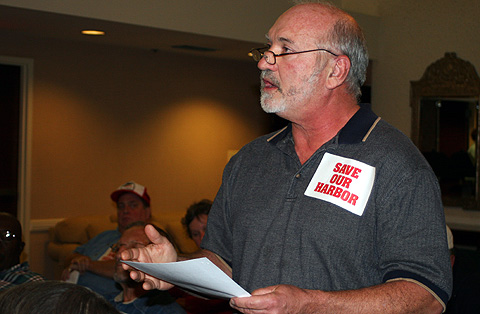 The boaters, many members of the Evanston Boat Ramp Association, said moving the ramp to Clark Street, as proposed in some versions of a draft lakefront master plan prepared by city consultants, would make conditions worse by increasing chances for collisions with sailboarders and other water users.

They also objected to suggestions that the ramp might be closed and not replaced, saying ramp association members had helped pay for improvements at the existing ramp site.

City Parks Director Doug Gaynor says the city sells about 200 permits to use the ramp each year. Residents pay $250 and non-residents $500 for a permit.

Because of lower Lake Michigan water levels, the city has faced increasing problems with sand buildup reducing water depths near the ramp in recent years, and Gaynor says the city has to spend about $40,000 each year to dredge sand from around the ramp.

City officials contend that the ramp will need expensive repairs and improvements if it is to remain in operation over the long haul, but Gaynor assured boaters at the lakefront master plan meeting held at the Presbyterian Home that there are no plans to close the ramp next year.

City consultant Greg Weykamp said the existing ramp location creates traffic and parking conflicts with other lakefront users and that the relatively low usage of the ramp and anticipated high repair costs led to exploration of closing or relocating it.

Frank Didier of 8501 Menard in Morton Grove, the president of the boat ramp association, said in an interview that his group has over 100 members, about half of them Evanston residents.

He said the ramp association members "are not rich people. They can’t afford to rent boat slips in a harbor."

Didier said the city could greatly increase ramp usage if it reduced its fees, which he said are now the highest on the Illinois side of the lake.

If the Evanston ramp were to close, ramp users said, the nearest alternative place to launch their boats would be in Winnetka.

Others among the crowd of about 75 people at the meeting objected to a concept floated by the lakefront consultants to reroute Sheridan Road traffic onto Judson Avenue between Church Street and Clark.

The proposal was designed to connect two small parks west of Sheridan to the lakefront and improve pedestrian safety by slowing traffic on Sheridan and narrowing the roadway that walkers would need to cross.

But the neighbors said the plan would increase traffic in the residential area and might just aggravate conditions for drivers on Sheridan.

Weykamp also unveiled possible alternatives to the rerouting that could address the pedestrian safety issue — including reducing traffic lane widths, adding curb bumpouts at intersections to reduce the width of the roadway pedestrians would have to cross, and creating a raised "table" in the roadway — something like an elongated speed-bump — at a possible new mid-block pedestrian crossing.