The Presbyterian Homes retirement community is planning to rebuild a large portion of its Westminster Place site in Northwest Evanston. 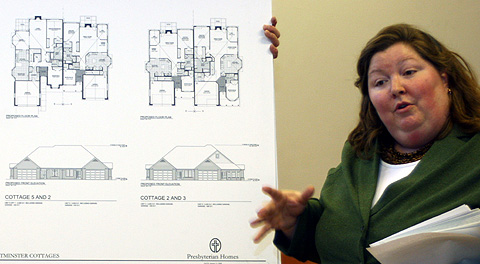 The non-profit presented preliminary plans for the project to the city’s Site Plan and Appearance Review Committee Wednesday.

The plans call for replacing 56 single-family cottage dwellings on the east third of the property with larger cottages designed to appeal to a new generation of retirees seeking more space.

The plan would also add a four-story, 32-dwelling-unit apartment building to the same section of the property. That building is designed to replace units lost as the organization has combined small units at its 1 Calvin Circle building to make them more marketable.

Nancy Tolan, facilities director for Presbyterian Homes, told the committee that the 56 existing cottages were built in 1959. Most, she said, are one-bedroom units with between 1,000 and 1,300 square feet of living space.

She said the floor plans are dated and the units lack garages or carports, "so the residents have to scrape snow off their cars if they can’t wait for our maintenance crews to come do it for them."

The new cottages would all have garages and more modern floor plans with up to 1,400 square feet of living space on the first floor. 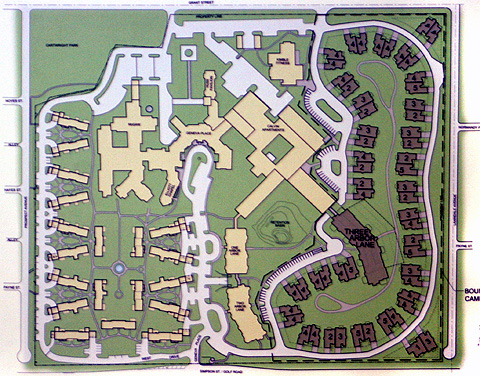 The new units are shown in dark grey on this site plan.

She said the organization is considering the possibility of also providing a "bonus room" on the second floor, but existing plans show only attic space there.

Evanston community Development Director James Wolinski said he feared that neighbors of the development along Lawndale Avenue might see the new four-story building as an encroachment.

"The beauty of Presbyterian Homes is that the height has always been at the center of the campus," Wolinski said, "now it’s starting to move out."

He praised the provisions in the plan that would have sprinkler systems installed in all the new cottages for fire protection.

Tolan said that, assuming the city grants approval for the project it, the four-story building would be constructed first with the new cottages constructed over a period of five to 15 years as existing units become vacant.

Tolan said that prices for the planned units haven’t been set yet but that prices for existing units range from as low as $130,000 on a non-refundable plan for the smallest apartments of around 500 square feet, to as high as $800,000.

On a refundable plan, which returns 90 percent of the purchase price to the buyer or the buyer’s estate after they move out or die, she said costs range from $350,000 to $1.2 million.

Tolan said the organization’s goal is to end up with 275 independent living units, a bit above the minimum of 250 units considered by industry experts to be the minimum needed to support the additional facilities required for a continuing care retirement community.

Tolan said Presbyterian Homes would next schedule a community meeting to get feedback from neighbors before starting the city’s planned development review process.